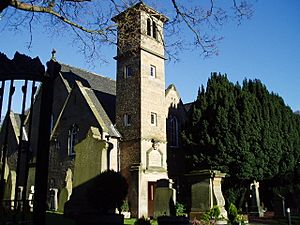 Colinton Parish Church is a congregation of the Church of Scotland. The church building is located in Dell Road, Colinton, Edinburgh, Scotland next to the Water of Leith.

A church has stood on the site for approximately 1000 years, but the current building was constructed and opened in 1908. Later, a new adjacent church hall was added in the 1990s.

The current church was redesigned in 1907-8 by the architect Sydney Mitchell. The church incorporates the tower from the old church, which had been designed by David Bryce and built in 1837. The interior has a neo-Byzantine design, with pink sandstone columns.

In 2001 the congregation had a roll of 1175 members, making it one of the largest church congregations by membership in the Church of Scotland.

Several former ministers have served as Moderator of the General Assembly of the Church of Scotland, most recently the Very Reverend Dr William Bryce Johnston (in 1980). The minister is currently the Rev. Rolf Billes. The previous minister was the Reverend Dr George Whyte, who demitted the charge (resigned) in September 2008 to become Clerk to the Church of Scotland's Presbytery of Edinburgh.[1]

A cemetery was added in the late 19th century, to the south of the historic graveyard. This area contains the village war memorial. A relatively rare Norwegian war grave lies in the southern section towards the centre.

The war memorial standing in the centre of the small cemetery, was designed by Pilkington Jackson.

All content from Kiddle encyclopedia articles (including the article images and facts) can be freely used under Attribution-ShareAlike license, unless stated otherwise. Cite this article:
Colinton Parish Church Facts for Kids. Kiddle Encyclopedia.