Water of Leith facts for kids 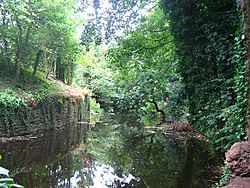 The Water of Leith, upriver from the Dean Village, running through a wooded gorge past the New Town.

The Water of Leith (Scottish Gaelic: Uisge Lìte) is the main river flowing near central Edinburgh, Scotland, and flows into the port of Leith where it flows into the sea via the Firth of Forth.

The name Leith may be of Brittonic origin and derived from *lejth meaning 'damp, moist' (Welsh llaith). It is less likely that the name derives from the Old Norse lodda meaning a river. The Gaelic form of the name is Lìte (Leith), with Uisge Lìte being the full translation of "Water of Leith".

The Dictionary of the Scots Language defines the term "water" here as "A large stream, usu. thought of as intermediate in size between a Burn and a river"

It is 35 km (22 mi) long and rises in the Colzium Springs at Millstone Rig of the Pentland Hills. It travels through Harperrig Reservoir, past the ruins of Cairns Castle, through Balerno, Currie, Juniper Green, Colinton, Slateford, Longstone, Saughton, Balgreen, Roseburn, West Coates and on to the nearest it gets to the Edinburgh city centre at the Dean Village, on the site of old watermills in a deep gorge. This ravine is dramatically spanned by the Dean Bridge, designed by Thomas Telford, which was built in 1832 for the road to Queensferry, and lies next to the New Town. 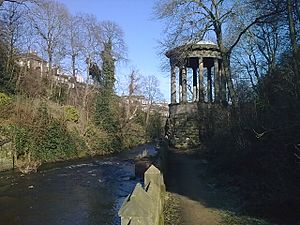 St Bernard's Well sits alongside the Water of Leith in the Stockbridge area, with Comely Bank opposite

The river flows on past Stockbridge, Inverleith, Canonmills and Warriston where it passes through shallows at a place known as Puddocky which is commonly thought to refer to "puddocks", the Scots language term for frogs, but actually took its name from the former Paddock Hall which was sited nearby. The river continues past Bonnington, the site of another watermill, to Leith where it widens into the old harbour and port at the Shore. Leith Docks have been extended considerably out into the firth from the old shoreline, and there are now plans to discontinue their use as a port and use the area for housing redevelopment.

There is a Water of Leith Walkway beside the river for the 12.25 miles (19.71 km) from Balerno to Leith, with approximately half a mile of the route on roads. The route forms an attractive haven for wildlife, passing through areas of woodland, often well separated from roads. For some distance the walkway follows the route of former railway tracks, and the remains of tunnels, bridges and other features of more than one railway may be seen at many places along the route.

A visitor centre is open to the public where the Union Canal passes over the Water of Leith via the Slateford Aqueduct at Slateford, in south-west Edinburgh. The Water of Leith Conservation Trust is dedicated to the conservation and enhancement of the river. The Trust provides education programs about the river and the environment. 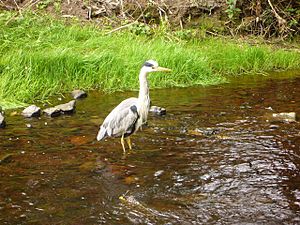 Heron on the Water of Leith

The river is stocked with brown trout, and also contains wild grayling, eels, stone loach, minnow, three-spined stickleback and flounder. A few sea-trout run the river, and occasional Atlantic salmon are reported, although those from which scale samples have been obtained have turned out to be from other catchments. Until the weirs are either demolished or furnished with effective fish-passes, there is little chance of a population of salmon establishing themselves in this river again. Roe deer, badgers, otters and other mammals are occasionally seen. The river and its environs are the haunt of a wide variety of woodland and water birds, including kingfisher, grey heron, pied wagtail, great spotted woodpecker and white-throated dipper.

All content from Kiddle encyclopedia articles (including the article images and facts) can be freely used under Attribution-ShareAlike license, unless stated otherwise. Cite this article:
Water of Leith Facts for Kids. Kiddle Encyclopedia.