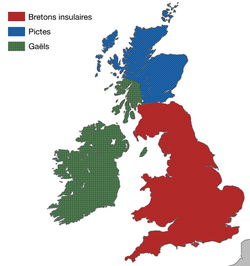 The parts of the British Isles where the Brittonic (red), Gaelic (green) and Pictish (blue) languages were spoken around 450-500 CE.

Common Brittonic (also called Common Brythonic, British, Old Brythonic, or Old Brittonic) was an ancient language spoken in Britain. It was the language of the Celtic people known as the Britons. By the 6th century it split into several Brittonic languages: Welsh, Cumbric, Cornish, and Breton.

Common Brittonic is descended from Proto-Celtic, a hypothetical parent language. By the first half of the first millennium BC it was already dividing into separate dialects or languages. There is some evidence that the Pictish language may have had close ties to Common Brittonic and might be a fifth branch.

Evidence from Welsh shows a great influence from Latin on Common Brittonic during the Roman period. This is particularly true of the Church and Christianity, which are nearly all Latin derivatives. Common Brittonic was replaced in most of Scotland by Gaelic. South of the Firth of Forth it was replaced by Old English (which later developed into Scots). Common Brittonic survived into the Middle Ages in Southern Scotland and Cumbria. Common Brittonic was gradually replaced by English throughout England. In the north of England, Cumbric disappeared as late as the 13th century. In the south, the Cornish was a dead language by the 19th century. There were some attempts to revitalize it have met with some success.

All content from Kiddle encyclopedia articles (including the article images and facts) can be freely used under Attribution-ShareAlike license, unless stated otherwise. Cite this article:
Common Brittonic Facts for Kids. Kiddle Encyclopedia.