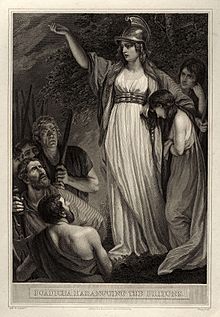 Queen Boadicea of the Iceni tribe.

The Britons (also called Brythons) were the people who spoke a Celtic language known as Common Brittonic. They lived in Great Britain during the Iron Age, Roman Britain and the Sub-Roman period following the Romans' departure from Britain. Following the arrival of the Anglo-Saxons, who occupied most what is now the country of England, some of the Britons migrated to Wales, Cornwall and southern Scotland, while others moved to Armorica and renamed it Brittany. Those who remained were absorbed into Anglo-Saxon society. 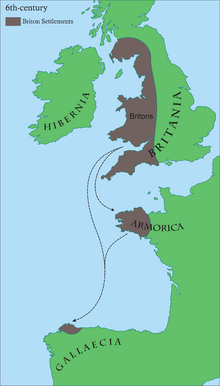 In about 330 BC, Pytheas, a Greek explorer began a voyage in which he discovered the British Isles. In 326 BC he landed and gave the island the name Prettanike or Brettainiai. The name became Britain.

When the Romans conquered Britain in 43 AD, they called the people living there Brittanni (also spelled Britanni). They were also aware of their tribal identities. In their histories the Romans said of them "they are a people harassed by hosts, who receive political exiles, who rebel, and who are among the remote peoples of the world." Monks writing in the 4th and 5th centuries also called them Britanni. Some used the term Britto.

The Anglo-Saxon Chronicle contains an account of the land and the people of Britain. ""The island of Britain is eight hundred miles long and two hundred miles broad: and here are in the island five peoples: English, Brito-Welsh, Scottish, Pictish, and Book-Latin."

The Welsh scholar John Rhys first used the terms Brythons and Brythonic. He wanted a more specific terms for the people of Wales and the Welsh of Cumbria and Cornwall than just the word Britons.

From the Iron Age onward, Britain was divided among a variety of Celtic tribes. When the Romans came, many of the tribes adopted Roman culture and the Latin language. 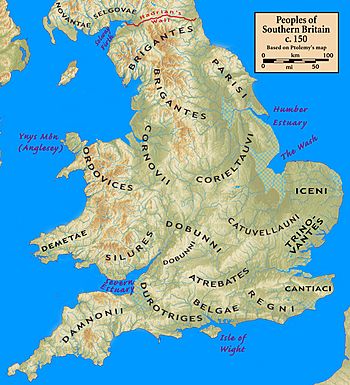 All content from Kiddle encyclopedia articles (including the article images and facts) can be freely used under Attribution-ShareAlike license, unless stated otherwise. Cite this article:
Britons (Celtic people) Facts for Kids. Kiddle Encyclopedia.