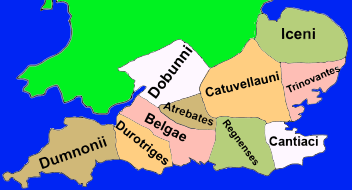 Celtic tribed in the south of England 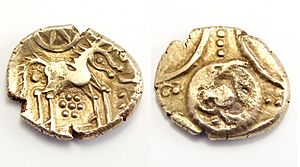 Coin used by the Iceni, before the Romans arrived.

The Iceni were a Celtic tribe who lived in Great Britain, in the area of modern-day Niorfolk and Suffolk. Emperor Claudius invaded Great Britain in the year 43 AD. After that, the Iceni became allies of Rome. At that time, Antedios was the ruler of the Iceni. There was little economic exchange between the Iceni and the Romans: The Iceni feared a loss of cultural identity. This meant, that the Romans saw the relationship with the Iceni as a bad one. The Roman governor, Publius Ostorius Scapula, decided to disarm the tribes the Romans had bad relations with, in the year 47, and to build new Roman fortifications.

Prasutagus, an Icene, was given the title of vassal king. Boudicca, Prasutagus' wife, incited the Iceni, and a few allied tribed, into resisting the Romans. This resistance took place in the years 60 and 61, and was not successful.

At the end of the first century, the Iceni had their own capital, Venta Icenorum, located near the modern-day village of Caistor St Edmund.

All content from Kiddle encyclopedia articles (including the article images and facts) can be freely used under Attribution-ShareAlike license, unless stated otherwise. Cite this article:
Iceni Facts for Kids. Kiddle Encyclopedia.