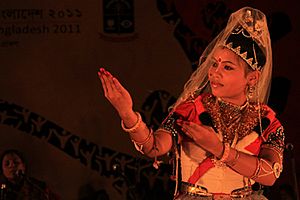 A tribal girl in Bangladesh

A tribe is a group of people who live and work together in a shared geographical area. A tribe has a common culture, dialect and religion. They also have a strong sense of unity. The tribe is usually headed by a chief. A tribal society is a group of tribes organized around kinships. Tribes represent a part in social evolution between bands and nations.

A tribe can be a collection of families or of families and individual people living together. A tribe usually divides up the jobs that need to be done among themselves. Most tribes have special customs or traditions.

Humans lived in tribes before they started living in cities and nations. There are still tribal groups all over the world. Their numbers are getting smaller and smaller. Many live as hunter-gatherers.

All content from Kiddle encyclopedia articles (including the article images and facts) can be freely used under Attribution-ShareAlike license, unless stated otherwise. Cite this article:
Tribe Facts for Kids. Kiddle Encyclopedia.