Boadicea and Her Daughters facts for kids

Boadicea and Her Daughters is a bronze sculptural group in London representing Boudica, queen of the Celtic Iceni tribe, who led an uprising in Roman Britain. It is located to the north side of the western end of Westminster Bridge, near Portcullis House and Westminster Pier, facing Big Ben and the Palace of Westminster across the road. It is considered the magnum opus of its sculptor, the English artist and engineer Thomas Thornycroft. Thornycroft worked on it from 1856 until shortly before his death in 1885, sometimes assisted by his son William Hamo Thornycroft, but it was not erected in its current position until 1902.

The statue portrays Boudica (commonly written as "Boadicea" in the Victorian era), Queen of the Iceni tribe of Britons, accompanied by her two daughters, mounted on a scythed chariot drawn by two rearing horses. The chariot is based on Roman models, not native British or Iceni models, and has a scythe blade attached to each wheel. She stands upright, in a flowing gown, with a spear in her right hand and her left hand raised. Her daughters with crouch in the chariot, one to either side of their mother. None of them holds reins to control the horses.

The statue was commissioned in the 1850s, after Thornycroft made an equestrian statue of Queen Victoria which was exhibited at the Great Exhibition in 1851. The statue was praised by Queen Victoria and Prince Albert, and they were involved with Thornycroft's new project. Albert intended the monumental statue to be erected over the central arch of Decimus Burton's entrance to Hyde Park, and asked Thornycroft to make a "throne upon wheels". Parallels were drawn between the Victoria and Boudica, whose name also means "victory". Albert lent two horses as models, and the statue bears some resemblance to a young Queen Victoria. Albert died in 1861 before the statue was completed.

Thornycroft completed a full size model of the work before his death in 1885, but there was no funding for it to be cast in bronze. An earthwork known as "Boadicea's Grave" on the north side of Parliament Hill was excavated in 1894, although no grave was found, but Thornycroft's son, John Isaac Thornycroft suggested the site would be appropriate for the location of his father's long-delayed monumental statue, but £6,000 for the casting in bronze was still not available. A committee was formed to raise funds by subscription. The necessary money was raised by 1898, and the statue was cast by the founder J. W. Singer in Frome for just £2,000, although there was still no site for it to be erected. 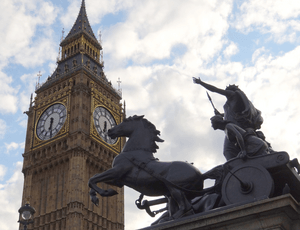 The statue is close to the Houses of Parliament

Thornycroft's statue was not installed until 1902, more than 17 years after his death. It was erected at Westminster Pier in June 1902, mounted on a large granite plinth by Thomas Graham Jackson. Inscriptions were added to the plinth in 1903; that on the front of the plinth reads BOADICEA/ (BOUDICCA)/ QUEEN OF THE ICENI/ WHO DIED A.D. 61/ AFTER LEADING HER PEOPLE/ AGAINST THE ROMAN INVADER. The right side of the plinth contains an inscription with text from William Cowper's poem Boadicea, an ode (1782): REGIONS CAESAR NEVER KNEW/ THY POSTERITY SHALL SWAY. An inscription on the plinth's left side reads, THIS STATUE BY THOMAS THORNYCROFT/ WAS PRESENTED TO LONDON BY HIS SON/ SIR JOHN ISAAC THORNYCROFT C.E./ AND PLACED HERE BY THE LONDON COUNTY COUNCIL/ A.D. 1902.

The statue is located in a busy position, with traffic from the Embankment and many pedestrian tourists passing from the Westminster Abbey, Parliament Square and Whitehall to the west over the bridge past the South Bank Lion towards County Hall, the London Eye, and Jubilee Gardens on the South Bank. Its plinth is often obscured behind a souvenir stall. It became a Grade II listed building in 1958.

All content from Kiddle encyclopedia articles (including the article images and facts) can be freely used under Attribution-ShareAlike license, unless stated otherwise. Cite this article:
Boadicea and Her Daughters Facts for Kids. Kiddle Encyclopedia.