Museum of London facts for kids 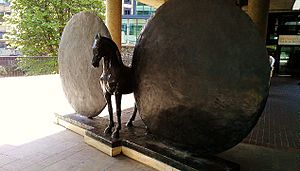 "Union: Horse with Two Disks": a public sculpture by Christopher Le Brun outside the Museum

The Museum of London is two museums in London. They display objects from the history and culture of the city.

The main museum is in London Wall, next to the Barbican Centre. There is also a museum in the Docklands showing boats, ships and other objects from London's naval past.

All content from Kiddle encyclopedia articles (including the article images and facts) can be freely used under Attribution-ShareAlike license, unless stated otherwise. Cite this article:
Museum of London Facts for Kids. Kiddle Encyclopedia.