Culture of London facts for kids 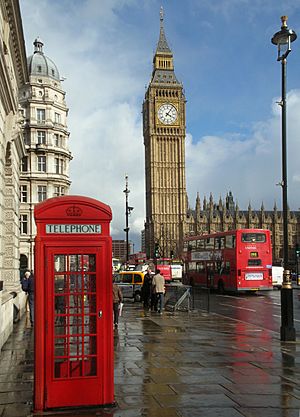 The culture of London concerns the music, museums, festivals and lifestyle within London, the capital city of the United Kingdom. London has frequently been described as a global cultural capital and is one of the world's leading business centres, renowned for its technological readiness and economic clout, as well as attracting the most foreign investment of any global city. As such, London has often been ranked as the world's capital city.

The city is particularly renowned for its theatre quarter, and its West End theatre district has given the name to "West End theatre", the strand of mainstream professional theatre staged in the large theatres in London. London is also home to notable cultural attractions such as the British Museum, the Tate Galleries, the National Gallery, the Notting Hill Carnival and The O2.

Through music, comedy and theatre, London has a lively nightlife with approximately 25.6 events per thousand people, 44.1% of those events being theatre based.

The city is home to many nationalities and the diversity of cultures have shaped the city's culture over time. 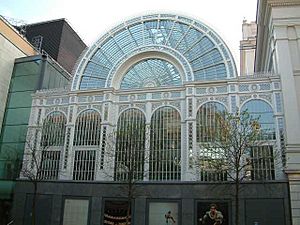 The Floral Hall of the Royal Opera House

There are three major concert halls in the capital. One of these is the Barbican Hall at Barbican Centre; which is home to the London Symphony Orchestra (LSO) and BBC Symphony Orchestra. The Royal Festival Hall, based at the South Bank Centre along with the Queen Elizabeth Hall and the Hayward Gallery is home to the London Philharmonic Orchestra (LPO), and the Philharmonia. The final and largest of the venues is the Royal Albert Hall, which hosts the Proms each summer. The Royal Philharmonic Orchestra (RPO) is also based in London at Cadogan Hall.

There are also several chamber orchestras, some of which specialise in period instrument performances, including the Orchestra of the Age of Enlightenment, and the Academy of St. Martin-in-the-Fields. Chamber music venues include the Purcell Room at the South Bank Centre; the Wigmore Hall and St John's, Smith Square.

A number of choirs have originated in London, varying in size and musical style. Among the city's large symphonic concert choirs are the London Philharmonic Choir and London Symphony Chorus, which have their origins as the choral sections of the LPO and the LSO, the London Chorus, London Voices and the Bach Choir. Smaller vocal groups in London include the Holst Singers and the choir of the English Concert. There is also a long tradition of choral singing in Christian churches and cathedrals, and among the choirs associated with London churches are the choirs of St Paul's Cathedral, Westminster Abbey and Westminster Cathedral, which sing daily services.

The Royal Opera House at Covent Garden is home to the Royal Opera and Royal Ballet companies. The other main opera company is the English National Opera. In the summer opera is performed in a temporary pavilion by Opera Holland Park, and there are occasional performances by visiting opera companies and small freelance professional opera companies. 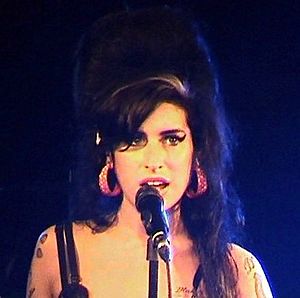 Amy Winehouse was a singer-songwriter from Southgate, north London.

London is famous for its rock scene, and was the starting point of some of the greatest 60s and 70s artists such as David Bowie, Iron Maiden, The Clash, Led Zeppelin, Fleetwood Mac, The Sex Pistols, The Who, Pink Floyd, Queen and popular 90s acts like Blur and Coldplay. Most major bands' tours will pass through London as well, favourite venues being the Brixton Academy, the London Astoria, and the Hammersmith Apollo.

In addition to spawning the bands mentioned above, London, in its capacity as the UK's cultural centre, has served as the base of a number of internationally important acts, including The Beatles and Elton John, as well as being instrumental in the birth of dance music.

London also has a thriving urban scene, mainly throughout the 21st century. Soul singers like Adele, Amy Winehouse and Lemar have found themselves chart, and international success. R&B singers such as the Sugababes, Leona Lewis, Taio Cruz, Jay Sean and Alexandra Burke are also extremely popular. London also has a strong rap scene; rappers including Wiley and Dizzee Rascal among others have helped contribute to London gaining the status of having the strongest rap scene outside of the USA.

London is the home of one of the biggest underground scenes in the world. Genres include Uk garage, Drum and bass, Dubstep, 2step and grime. 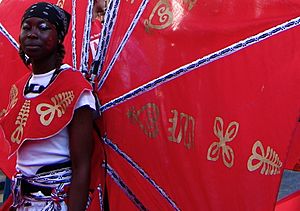 Girl in Costume at the Notting Hill Carnival

London hosts several festivals, fairs and carnivals throughout the year with over 40 free festivals each year. The most famous is the Notting Hill Carnival, the world's second largest carnival. The carnival takes place over the August bank holiday weekend, and attracts almost 1 million people. It has a distinctly Afro-Caribbean flavour, and highlights include a competition between London's steelpan bands and a 3-mile street parade with dancing and music.

There are also large parades held on St. George's Day (April 23) and St Patrick's Day (March 17). The Dance Umbrella is held every October, and features a variety of dance companies putting on displays across London. In addition there are many smaller fairs and parades, including the Christmas Without Cruelty Fayre, a fair held annually to promote animal rights. 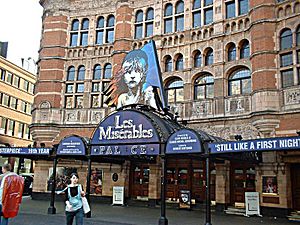 Les Misérables at the Palace Theatre

There are over three dozen major theatres, most concentrated in the West End (see the articles West End theatre and List of London venues). West End theatres are commercial ventures that host predominantly Musical Theatre shows but genres such as comedy and serious drama are sometimes shown. The subsidised or non-commercial theatre is vibrant in the capital with theatres like the National Theatre and Shakespeare's Globe both of which are based on the South Bank, the Barbican in the city, the Royal Court Theatre in Chelsea which specialises in new drama, and the Old Vic; and Young Vic, both in Lambeth. The Royal Shakespeare Company which is based in Stratford, presents seasons in London as well. Smaller fringe theatres like Battersea Arts Centre, Bloomsbury Theatre, Almeida Theatre and Tricycle Theatre are also popular.

The capital also boasts a successful dance and physical theatre scene, home to two ballet companies; the Royal Ballet based at the Royal Opera House and English National Ballet based in Kensington, performing at the London Coliseum. Sadler's Wells Theatre on Rosebery Avenue in Islington exclusively shows dance performances throughout the year ranging from existing and new Contemporary companies, Musical Theatre, and touring ballet companies. Dance performances also take place at the Barbican Centre, Peacock Theatre (Sadler's Wells), and the Queen Elizabeth Hall. Rambert, Richard Alston Dance Company, Candoco, and Siobhan Davies Dance are all based in London as well as choreographers such as Matthew Bourne, Wayne McGregor, Lloyd Newson, Akram Kahn and Hofesh Shechter also basing their companies within the capital. 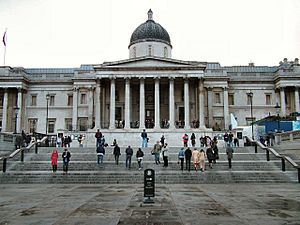 The National Gallery from Trafalgar Square

In addition to Tate Modern major contemporary art venues include White Cube, the Saatchi Gallery, and The ICA. 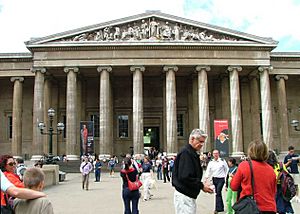 The main entrance to the British Museum
Main page: List of London museums 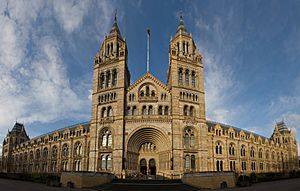 London is home to over 240 museums, galleries, and other institutions, many of which are free of admission charges and are major tourist attractions as well as playing a research role. The first of these to be established was the British Museum in Bloomsbury, in 1753. Originally containing antiquities, natural history specimens and the national library, the museum now has 7 million artefacts from around the globe. Also of eighteenth-century foundation is the Royal Academy of Arts; its summer exhibition has been an annual fixture on the London social calendar since 1769. In 1824 the National Gallery was founded to house the British national collection of Western paintings; this now occupies a prominent position in Trafalgar Square.

In the latter half of the nineteenth century the locale of South Kensington was developed as "Albertopolis", a cultural and scientific quarter. Three major national museums are located there: the Victoria and Albert Museum (for the applied and Decorative arts), the Natural History Museum and the Science Museum. The national gallery of British art is at Tate Britain, originally established as an annexe of the National Gallery in 1897. The Tate Gallery, as it was formerly known, also became a major centre for modern art; in 2000 this collection moved to Tate Modern, a new gallery housed in the former Bankside Power Station. London's museums of military and maritime history also opened in the twentieth century: the Imperial War Museum in 1917, and the National Maritime Museum in 1934.

London has several smaller museums of note. The Dulwich Picture Gallery was the first purpose-built public art gallery in England, opening in 1817. Its architect, Sir John Soane, turned his own house in Lincoln's Inn Fields into a museum and architectural showcase, known as the Soane Museum. The Wallace Collection is a notable small collection of Old Master paintings and furniture, with an emphasis on French works. The Courtauld Institute of Art, which pioneered the study of art history in Britain from its foundation in 1932, is now located in Somerset House, the former premises of the Royal Academy. The Museum of London, charting the capital's history, has been located in the Barbican complex since 1976; a sister museum in the Docklands opened in 2003.

The city of London has also served as an inspiration for other cities in the world,

London is the home of many professional sport teams and has hosted various international sporting events, including the Summer Olympics in 1908, 1948, and 2012. Football is very popular and London is home to Wembley Stadium as well as club stadiums such as the Emirates Stadium, Stamford Bridge and Tottenham Hotspur Stadium. Cricket grounds such as Lord's and The Oval are in London and rugby league and rugby union are popular team sports in the city. The Boat Race and The Wimbledon Championships, among the most famous contests in rowing and tennis, respectively, occur in London. The Olympic Stadium hosts athletics events.

All content from Kiddle encyclopedia articles (including the article images and facts) can be freely used under Attribution-ShareAlike license, unless stated otherwise. Cite this article:
Culture of London Facts for Kids. Kiddle Encyclopedia.