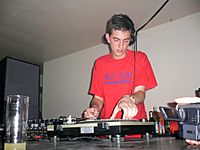 Skream, a popular dubstep DJ and producer, from Croydon UK, performing live in 2006.

Dubstep is a genre of music that started in South London. It draws influence from 2-step garage, dub, drum and bass, grime and reggae. A popular dubstep producer Skrillex changed the genre into something much heavier with more growls, gritty basslines and fat subbasses.

Since than the dubstep scene has changed a lot with dubstep going from the underground genre that it was to a mainstream one. It has been played on big festivals like Ultra Music Festival and Lost Lands.

Dubstep is usually instrumental. Its tempo usually ranges between 138 to 150 beats per minute. Many songs have two bass drops, where a switch of rhythm and/or bass line occurs and usually follows a recognizable build section and break.

A style of Americanized, heavier and aggressive form of dubstep is referred to as brostep. It has become very popular. Brostep was started by Skrillex..

All content from Kiddle encyclopedia articles (including the article images and facts) can be freely used under Attribution-ShareAlike license, unless stated otherwise. Cite this article:
Dubstep Facts for Kids. Kiddle Encyclopedia.