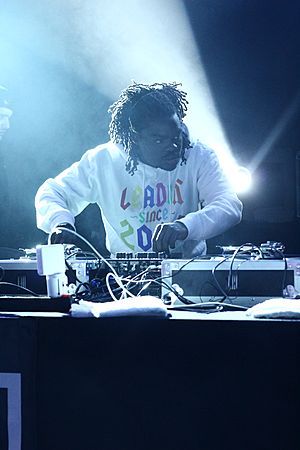 A disc jockey (also called a DJ or deejay) is a person who plays recorded pop or dance music for dancers or listeners and introduces the names of the songs using a microphone.

There are several types of DJs. A radio DJ plays music files (like mp3) or recorded CDs on a radio station and announces the names of the songs. A club DJ plays music files or recorded CDs over a PA system (an amplifier and loudspeakers) at a nightclub, rave, or disco. A hip hop DJ uses turntables and vinyl records to do scratching and make music while other hip hop musicians do rapping (rhythmic type of singing). Reggae DJs play recordings of rhythm instruments and then rap or "toast" (made-up chanting and boasting) with a microphone.

All content from Kiddle encyclopedia articles (including the article images and facts) can be freely used under Attribution-ShareAlike license, unless stated otherwise. Cite this article:
Disc jockey Facts for Kids. Kiddle Encyclopedia.