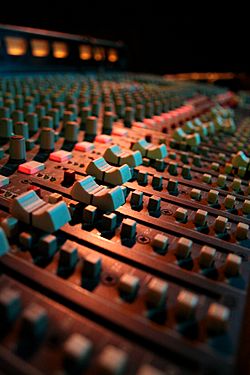 In audio engineering, a fade is a gradual increase (fade-in) or decrease (fade-out) in the level of an audio signal. The term can also be used for film cinematography or theatre lighting, in much the same way (see: fade (filmmaking)).

A recorded song may be gradually reduced to silence at its end (fade-out), or may gradually increase from silence at the beginning (fade-in). For example, the songs "Bitter Sweet Symphony" by The Verve and "Turn to Stone" by Electric Light Orchestra fade in from the beginning, while the songs "Born to Be Wild" by Steppenwolf, "Boogie Oogie Oogie" by A Taste of Honey, and "Hey Jude" by The Beatles fade out. However, "Born to be Wild" and "Boogie Oogie Oogie" fade out in a matter of seconds, whereas "Hey Jude" takes over 2 minutes to completely fade out. "Goodbye Stranger" by Supertramp takes about a minute to fade out. Fading-out can serve as a recording solution for pieces of music that contain no obvious ending.

Though relatively rare, songs can fade out, then fade back in. Some examples of this are "Helter Skelter" by The Beatles, "Suspicious Minds" by Elvis Presley, "Thank You" by Led Zeppelin or "Undercover of the Night" by The Rolling Stones.

The term fade is also used in multi-speaker audio systems to describe the balancing of power between front and rear channels.

"Neptune", part of the orchestral suite, The Planets, by Gustav Holst, was an early piece of music to have a fade-out ending. Holst stipulates that the women's choruses are "to be placed in an adjoining room, the door of which is to be left open until the last bar of the piece, when it is to be slowly and silently closed", and that the final bar (scored for choruses alone) is "to be repeated until the sound is lost in the distance". Although commonplace today, the effect bewitched audiences in the era before widespread recorded sound—after the initial 1918 run-through, Holst's daughter, Imogen (in addition to watching the charwomen dancing in the aisles during "Jupiter") remarked that the ending was "unforgettable, with its hidden chorus of women's voices growing fainter and fainter... until the imagination knew no difference between sound and silence".

The technique of ending a spoken or musical recording by fading out the sound goes back to the earliest days of recording. In the era of mechanical (pre-electrical) recording, this could only be achieved by either moving the sound source away from the recording horn, or by gradually reducing the volume at which the performers were singing, playing or speaking. With the advent of electrical recording, smooth and controllable fadeout effects could be easily achieved by simply reducing the input volume from the microphones using the fader on the mixing desk.

No single recording can be reliably identified as "the first" to use the technique. In 2003, on the (now-defunct) website Stupid Question , John Ruch listed the following recordings as possible contenders:

Bill Haley’s cover version of "Rocket 88" (1951) fades out to indicate the titular car driving away. There are claims that The Beatles' "Eight Days a Week" (recorded 1964) was the first song to use the reverse effect—fade-in. (It also fades out.)

The earliest such recording anybody could name for me is an 1894 78 rpm record called "The Spirit of ’76", a narrated musical vignette with martial fife-and-drum that gets louder as it 'nears' the listener and quieter as it 'moves away'. ....

As a film buff, I have a gut feeling that movies were an influence here. Fade-ins and fade-outs are cinematic devices that begin and end scenes—film language that developed at the same time as these early recordings. The term 'fade-out' itself is of cinematic origin, appearing in print around 1918. And jazz, a favorite of early records, was a popular subject of early movies, too.

A fader is any device used for fading, especially when it is a knob or button that slides along a track or slot. A knob which rotates is usually not considered a fader, although it is electrically and functionally equivalent. A fader can be either analogue, directly controlling the resistance or impedance to the source (e.g. a Potentiometer); or digital, numerically controlling a digital signal processor (DSP). Digital faders are also referred to as virtual faders, since they can be viewed on the screen of a digital audio workstation. Modern high-end digital mixers often have piezo-electric actuators attached to the faders such that they can be multi-use and will jump to the correct position for the selected function and/or saved setting.

A crossfader on a dj mixer essentially functions like two faders connected side-by-side, but in opposite directions. It allows a DJ to fade one source out while fading another source in at the same time. This is extremely useful when beatmatching two phonograph records or compact discs.

The technique of crossfading is also used in audio engineering as a mixing technique, particularly with instrumental solos. A mix engineer will often record two or more takes of a vocal or instrumental part and create a final version which is a composite of the best passages of these takes by crossfading between each track.

In the perfect case the crossfader would keep constant output level. However, there's no standard how this should be achieved. Many DJ equipment manufacturers offer different mixers for different purposes (e.g. scratching, beatmixing, cut mixing, etc.). High-end mixers often have crossfade curve switches allowing the DJ to select the type of crossfade necessary. Experienced DJs are also able to crossfade between tracks using the channel faders.

There are many software applications that feature virtual crossfaders. For instance, burning-software for the recording of audio-CDs.

On a mixer with auxiliary send mixes, the send mixes are configured pre-fader or post-fader.

If a send mix is configured pre-fader, then changes to the main channel strip fader does not affect the send mix. This is useful for stage monitor mixes where changes in the Front of House channel levels would distract the musicians.

If a send mix is configured post-fader, then the level sent to the send mix follows changes to the main channel strip fader. This is useful for reverberation and other signal processor effects.

All content from Kiddle encyclopedia articles (including the article images and facts) can be freely used under Attribution-ShareAlike license, unless stated otherwise. Cite this article:
Fade (audio engineering) Facts for Kids. Kiddle Encyclopedia.