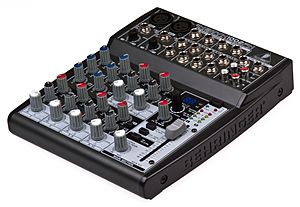 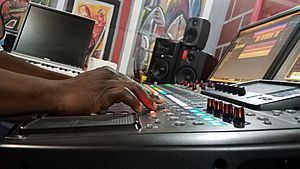 An audio mixer is device which is used to mix several sounds together. The user can control the volume on each channel or sound source to be as loud as they want. The amount of channels may vary depending on the mixer. Different sources may be used such as microphones, sound cards and CD players. Usually mixers have pre-amplifiers for microphones and inputs may be balanced.

All content from Kiddle encyclopedia articles (including the article images and facts) can be freely used under Attribution-ShareAlike license, unless stated otherwise. Cite this article:
Audio mixer Facts for Kids. Kiddle Encyclopedia.