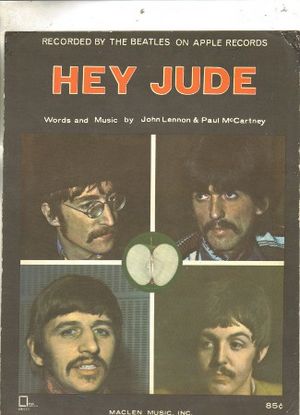 "Hey Jude" is a song by English pop-rock group The Beatles. It was written by Paul McCartney. It evolved from "Hey Jules", a song McCartney wrote for Lennon's son, Julian, during his parents' divorce.

"Hey Jude" was released in August 1968. It is over seven minutes in length. At the time, this was the longest single ever to top British music charts.

All content from Kiddle encyclopedia articles (including the article images and facts) can be freely used under Attribution-ShareAlike license, unless stated otherwise. Cite this article:
Hey Jude Facts for Kids. Kiddle Encyclopedia.