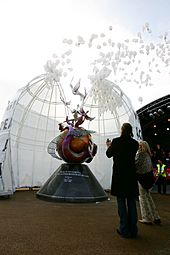 The John Lennon Peace Monument, also known as the European Peace Monument, is a peace monument entitled Peace & Harmony in Liverpool, England, dedicated to the memory of John Lennon. Peace & Harmony was unveiled by Julian and Cynthia Lennon at a ceremony in Chavasse Park, Liverpool, on Saturday 9 October 2010 to celebrate what would have been John Lennon's 70th birthday. The monument is now on the waterfront adjacent to ACC Liverpool at Kings Dock.

The eighteen-foot sculpture entitled Peace & Harmony was created by Lauren Voiers, a 19-year-old American artist, and fabricated by Lyle London at Art in Metal USA in Tempe, Arizona. Voiers was commissioned by the Global Peace Initiative to create the monument from her original painting, Peace & Harmony, as a part of the Global Peace Initiative to position sculptures of peace on each continent.

The art work was originally in a five-acre green space in Chavasse Park, but is now in the public space alongside ACC Liverpool, offering a geographical point where people can gather to remember John Lennon and contemplate his quest for world peace. The sculpture is hand-painted metal with a white glass feather placed at the top. Artist Voiers describes the essence of the monument as it relates to John Lennon, "His overall message is of people for people. When I was starting the monument I decided to incorporate music as the overall theme. There are a lot of healing powers to music, and Lennon captured that through his whole career and in dedicating himself to peace and bringing people together." 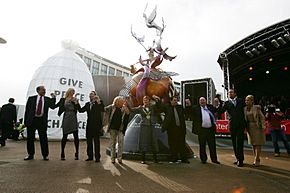 “Lennon’s message of peace is timeless and is one that is now more relevant than ever. We hope that this imposing monument dedicated to John will become a place that people from all over the world will visit to contemplate peace and John Lennon’s contribution to it through his music.

“Liverpool is the only ideal destination for such a remarkable monument and we feel sure that it will take on a global significance as word travels round the world that there is a place to go to in England where people can meet under the timeless banner of peace.” 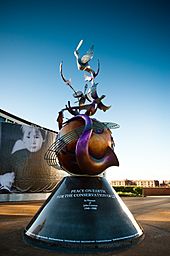 The monument is the second peace monument to be gifted by the Global Peace Initiative; the first is the peace monument for Asia which has a permanent home in Singapore. There are plans for a third monument to be gifted to the people of South America as part of a pledge by the Global Peace Initiative to reach out to all continents. At the unveiling ceremony at Chavasse Park in 2010, Liverpool City Council leader Joe Anderson said:

"The statue is there as a celebration of John's legacy.”
"The Global Peace Initiative picking John and wanting the monument in Liverpool is a real mark of the great man's incredible achievements and the fact he touched millions and millions of lives."

At the unveiling of the European Peace Monument Julian Lennon told the crowd which included European ambassadors, Beatles former drummer Pete Best and hundreds of Liverpudlians:

“I think the mourning is over for John. I think it’s time to celebrate which is what we’re doing, thinking about his life which was positive and good, enjoying the joy he had and we all have from hearing his music.” 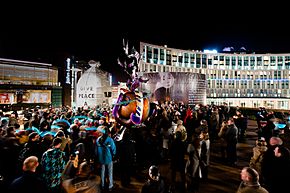 Fans of John Lennon and The Beatles made their way to Liverpool on 8 December 2010 to mark the 30th anniversary of John Lennon's death with a candlelit vigil that took place at the city's European Peace Monument dedicated to John. Those attending the 2010 unveiling of the monument were led in song on the occasion by local singers and musicians. Since being unveiled by Julian and Cynthia Lennon on Lennon's birth date, 9 October, the peace monument has established itself as a popular focal point for visitors to The Beatles home city looking to celebrate Lennon's life and message of peace through his music. Jerry Goldman, director of The Beatles Story, was instrumental in having the monument erected in Liverpool. He said, "although the European Peace Monument has only been on public display for just over a month it's already taken on a global significance of its own. People from all over the world are coming to the city to pay their respects and consider Lennon's message of peace through his music."

All content from Kiddle encyclopedia articles (including the article images and facts) can be freely used under Attribution-ShareAlike license, unless stated otherwise. Cite this article:
John Lennon Peace Monument Facts for Kids. Kiddle Encyclopedia.