Sir James Paul McCartney (born 18 June 1942) is an English singer, songwriter and composer, and one of the most successful musicians in the world. He was a member of the rock band The Beatles, and with John Lennon wrote most of the group's songs. 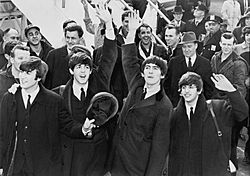 McCartney with Lennon, Harrison and Starr, 1964

McCartney began writing songs before he was sixteen, and has written well over two hundred. His most famous song is "Yesterday", recorded by the Beatles in 1965. Since then around 2000 artists have recorded the song. Other songs written by McCartney for The Beatles include "Can't Buy Me Love", "Hey Jude", "Penny Lane", "Eleanor Rigby" and "Let It Be".

Often, Beatles songs would have "Lennon/McCartney" written on the record, and it would look like that they had written it together. In fact, most Lennon/McCartney songs were written by only one of them, or with one adding only small parts to the other's work. Each counted on the other to help make their songs better, so they agreed to share the credit equally.

Since the Beatles had stopped working together in 1971, McCartney started a new band called Wings with his wife Linda. Wings also had many hit records, including "Band On The Run" and "Mull Of Kintyre". McCartney wrote "Live and Let Die", which became the theme song to a James Bond film with the same title. Wings disbanded in 1981.

Later McCartney recorded a single called "Ebony and Ivory" with Stevie Wonder, then "The Girl is Mine" and "Say, Say, Say" with Michael Jackson. A song with Jackson called "The Man" was released on McCartney's fifth solo album Pipes of Peace. He and Jackson became friends, but this ended after Jackson outbid McCartney for ownership of the publishing company which owned most of the Beatles's music.

McCartney had other hit songs, and also wrote and starred in the movie, Give My Regards to Broad Street, with Linda. The theme song from the movie, "No More Lonely Nights", was also a hit, but the movie did poorly, and McCartney's popularity suffered. He had to work hard to prove his talent was still strong. He co-wrote new songs with Elvis Costello, and began touring more often than he had in years.

Along with popular music, McCartney also began composing classical music, including an oratorio about Liverpool. McCartney was knighted for his contributions to music and to British culture, and for his charity work. He bought John Lennon's former school, Quarry Bank, which he then turned into a performing arts school.

In 1990, the minor planet 4148 was named "McCartney" in his honour. In 2010, he was honoured by President Barack Obama with the Gershwin Prize for his contributions to popular music. He returned to the White House later that year as a recipient of the Kennedy Center Honors. In 2012, he became the last Beatle to receive a star on the Hollywood Walk of Fame.

McCartney married Linda Eastman, a photographer, in 1969. She had a daughter, Heather, whom he adopted. McCartney and Linda had three more children together, named Mary, Stella and James. Stella became a popular fashion designer after she grew up.

Linda died in 1998 of breast cancer (McCartney's mother also died from the same disease in 1956). He married model Heather Mills in 2002; the couple's daughter Beatrice was born in 2003. McCartney and Mills separated in 2006, and, after a long battle over a settlement, McCartney and Mills divorced in March 2008.

McCartney married New Yorker Nancy Shevell, 51, in a civil ceremony at Old Marylebone Town Hall, London, on 9 October 2011. The couple had been dating since November 2007.

There was an urban legend that said that McCartney died in a car crash in 1966 and was replaced by a look-alike. 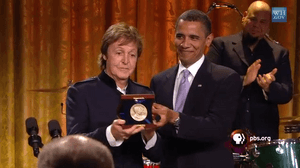 McCartney receiving the 2010 Gershwin Prize from US President Barack Obama

He was appointed Member of the Order of the Companions of Honour (CH) in the 2017 Birthday Honours for services to music.

The Fireman (McCartney and Youth)

All content from Kiddle encyclopedia articles (including the article images and facts) can be freely used under Attribution-ShareAlike license, unless stated otherwise. Cite this article:
Paul McCartney Facts for Kids. Kiddle Encyclopedia.