Brian Samuel Epstein (19 September 1934 - 27 August 1967) was an English businessman. Epstein was the manager of The Beatles, who became the most popular rock band in the world during the 1960s.

Epstein started out to become an actor, and went to school at RADA (the Royal Academy of Dramatic Art) with future movie stars Peter O'Toole and Susannah York. He was not happy at school, though, and quit to work in his family's furniture stores in Liverpool. He was a skillful salesman, and loved classical music. When his family opened a record department in one of their stores, Epstein was put in charge. The department was so successful that the family decided to open a whole store to sell music and records. This was named NEMS, for North End Music Stores, and Epstein became its boss. This store was also a big success.

Popular music, rock and roll especially, sold better than classical music, and Epstein wanted to sell what the public would buy most. He began to stock rock and roll records, and record buyers around England liked Epstein and his store. Some of his customers were members of bands, looking for new music to play or to pass the time, and came often to the store. Among those bands were the early Beatles.

Epstein was Jewish and homosexual. 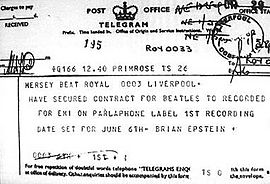 Late in 1961, when a fan asked Epstein about a record the Beatles had made in Germany, Epstein was unable to find it through his sources. When he learned the band were playing at the Cavern Club not far away, Epstein visited them there, and was impressed by their act. He found out what he needed to know to get the record, so NEMS could sell copies. Epstein also discovered that the band had no manager, but they wanted one, and their main goal was to get a recording contract in England. Epstein became their manager.

Epstein used his sales ability to get the band more and better jobs playing music. He also used his position (as manager of one of the leading music stores in northern England) to make contact with different record labels, hoping to get the Beatles signed up. An audition with Decca Records on New Year's Day 1962 sounded hopeful, but Decca decided to turn the band down, as did most of the labels Epstein approached.

Decca gave Epstein a copy of the band's demo (demonstration) tape, which he used to promote them, but could not find anyone interested. He thought an actual record might work better than the tape, so he went to have a test record made. The recording engineer who made the record told Epstein about George Martin, who worked for EMI's Parlophone Records and had been looking for a rock band to record. Martin liked what he heard well enough to offer the band another audition.

The Beatles passed their EMI audition as a group, and signed a contract with Parlophone. Drummer Pete Best did not meet Martin's standards, though, and Martin planned to use a studio drummer instead on their records. When the band found out, they asked Epstein to fire Best, and they replaced him with Ringo Starr, who quit another band to join them.

Over the next year (1963), The Beatles became the most popular recording act in Britain and Europe, and then in America during 1964. Following their success, Epstein signed up other bands and singers, including Gerry and the Pacemakers, Cilla Black, Billy J. Kramer and the Remo Four. Each found success and hit records, but none became as popular as the Beatles. Epstein started a management company, NEMS Enterprises (named after the music store), who later signed up the Bee Gees, Jimi Hendrix, and Cream.

Like many pop stars, Epstein also had fans, and gave away signed photographs of himself. He published an autobiography (his life story) in 1964, with help from Derek Taylor, who was the Beatles's press agent. Epstein was still interested in theater, and he bought the Saville Theatre in London, which presented plays and rock concerts.

The Beatles and all the artists he managed mourned his death. It was said later that losing him was the beginning of the Beatles breakup, which happened in 1970.

All content from Kiddle encyclopedia articles (including the article images and facts) can be freely used under Attribution-ShareAlike license, unless stated otherwise. Cite this article:
Brian Epstein Facts for Kids. Kiddle Encyclopedia.