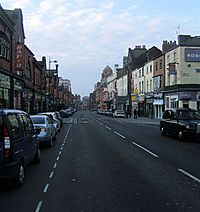 The original Mersey Beat office was at 81a Renshaw Street, Liverpool. (green shop front on the right)

The Mersey Beat or Mersey Sound or Liverpool Sound is the name for a type of music that came out in the city of Liverpool, England in the early 1960s.

Maybe the first group to be thought of as a part of genre were Kingsize Taylor and the Dominoes. The most famous group of this genre were The Beatles. Other important groups include Gerry and the Pacemakers, The Searchers and the female singer Cilla Black.

All content from Kiddle encyclopedia articles (including the article images and facts) can be freely used under Attribution-ShareAlike license, unless stated otherwise. Cite this article:
Mersey Beat Facts for Kids. Kiddle Encyclopedia.