Peter Seamus Lorcan O'Toole (2 August 1932 – 14 December 2013) was an Irish movie and stage actor. He was known for his stage plays that were mostly based on that of William Shakespeare.

O'Toole won four Golden Globes, a BAFTA Award, and an Emmy Award. He also received an honorary Academy Award in 2003.

O'Toole was raised as an Irish Catholic. He was raised in Leeds, West Riding of Yorkshire, England and stayed there until he was forced out due to World War II. O'Toole studied to become an actor at the Royal Academy of Dramatic Art from 1952 until 1954. 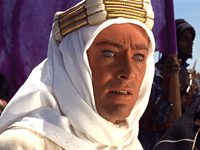 Publicity photo for Lawrence of Arabia 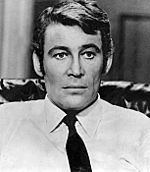 O'Toole's career began in 1954 on stage. His movie career began in 1960 in the movie Kidnapped as Robin MacGregor. His became famous when he played T. E. Lawrence in Lawrence of Arabia. He became one of the most famous actors during the 1960s and 1970s. In 1972 O'Toole played both Miguel de Cervantes and Don Quixote in Man of La Mancha.

In 1980, he received good reviews for playing the director in the behind-the-scenes movie The Stunt Man. He received mixed reviews as John Tanner in Man and Superman and as Henry Higgins in Pygmalion. He won a Laurence Olivier Award for his performance in Jeffrey Bernard is Unwell (1989).

O'Toole played King Priam in the 2004 movie Troy. His last worldwide movie role was as food critic Anton Ego in the 2007 Disney-Pixar movie Ratatouille. On 10 July 2012 O'Toole released a statement that he would be retiring.

He was offered a knighthood but rejected it in objection to Prime Minister Margaret Thatcher's policies.

O'Toole was nominated for eight Academy Awards. He holds the record of having the most nominations for an Academy Award without winning. He won four Golden Globes, a BAFTA Award, and an Emmy Award. In 2003 O'Toole received an honorary Academy Award.

O'Toole was married to Siân Phillips from 1959 until they divorced in 1979. O'Toole had three children; two daughters with Phillips (Kate and Patricia) and a son by his girlfriend Karen Brown (Lorcan Patrick O'Toole). O'Toole lived in London, England. He was lifelong friends with Irish actor Richard Harris until Harris' death in 2002.

O'Toole recovered from stomach cancer in the 1970s. He also had stomach cancer for the last eighteen months of his life. He died of the disease in the Wellington Hospital in London, aged 81. President of Ireland Michael D. Higgins lead a tribute to O'Toole. Higgins called O'Toole "a friend".

O'Toole's funeral was held on 20 December 2013 at his London home. Rock star Sting and ex-wife Siân attended his funeral. His remains were later cremated. O'Toole's remains ware being planned to be taken back to his birthplace of Connemara, Ireland. His daughter Kate said, "We're bringing him home. It's what he would have wanted." At the mean time, O'Toole's ashes are kept in a safe in the Irish presidential mansion.

All content from Kiddle encyclopedia articles (including the article images and facts) can be freely used under Attribution-ShareAlike license, unless stated otherwise. Cite this article:
Peter O'Toole Facts for Kids. Kiddle Encyclopedia.