Robert Anthony De Niro was born in Greenwich Village, New York City, the son of Virginia Holton Admiral, a painter and poet, and Robert Henry De Niro, an abstract expressionist painter and sculptor. His father is half Irish and half Italian descent and His mother is of half German, with her other roots of English, French and Dutch descent. 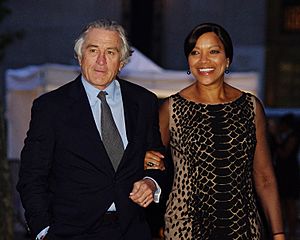 De Niro has twin sons, Julian Henry and Aaron Kendrik. They were delivered by a surrogate mother in 1995. His partner was a long-term live-in relationship with former model Toukie Smith.

In 1997, De Niro married actress Grace Hightower. Their son Elliot was born in 1998. The couple split in 1999. The divorce was never finalized and in 2004 they renewed their vows. In December 2011, they had a daughter, Helen Grace. She was born through a surrogate.

In addition to his six children De Niro has three grandchildren.

In 2003, it was said that De Niro had prostate cancer. He went on to make a full recovery.

All content from Kiddle encyclopedia articles (including the article images and facts) can be freely used under Attribution-ShareAlike license, unless stated otherwise. Cite this article:
Robert De Niro Facts for Kids. Kiddle Encyclopedia.