James Byron Dean (February 8 – September 30, 1955) was an American actor. He is remembered as a cultural icon of teenage disillusionment and social estrangement, as expressed in the title of his most celebrated film, Rebel Without a Cause (1955), in which he starred as troubled teenager Jim Stark. The other two roles that defined his stardom were loner Cal Trask in East of Eden (1955) and moody ranch hand Jett Rink in Giant (1956).

After his death in a car crash, Dean became the first actor to receive a posthumous (after death) Academy Award nomination for Best Actor, and remains the only actor to have had two posthumous acting nominations. In 1999, the American Film Institute ranked him the 18th best male movie star of Golden Age Hollywood.

Dean was born in Marion, Indiana, he was an only child who was very close to his mother who died when he was nine years old. Unable to care for his son, Dean's father sent him to live with his aunt and uncle in Fairmount, Indiana.

Dean's overall performance in school was exceptional and he was a popular student. He played on the baseball and varsity basketball teams, studied drama, and competed in public speaking. After graduating from Fairmount High School in May 1949, he moved back to California . He enrolled in Santa Monica College (SMC) and majored in pre-law. He transferred to UCLA for one semester and changed his major to drama. While at UCLA, Dean was picked from a group of 350 actors to portray Malcolm in Macbeth. At that time, he also began acting in James Whitmore's workshop. In January 1951, he dropped out of UCLA to pursue a full-time career as an actor. 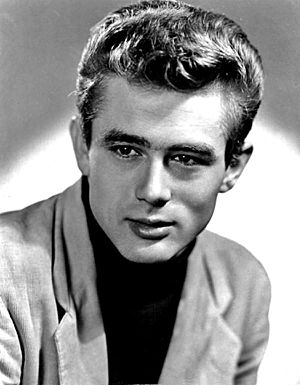 Dean's first television appearance was in a Pepsi Cola commercial. While struggling to get jobs in Hollywood, Dean also worked as a parking lot attendant at CBS Studios, during which time he met a radio director for an advertising agency, who offered him professional help and guidance in his chosen career, as well as a place to stay.

In July 1951, Dean appeared on Alias Jane Doe. In October 1951 Dean moved to New York City. There, he worked as a stunt tester for the game show Beat the Clock, but was subsequently fired for allegedly performing the tasks too quickly. He also appeared in episodes of several CBS television series.

Dean's career picked up and he performed in further episodes of early 1950s television shows. One early role, for the CBS series Omnibus in the episode "Glory in the Flower", saw Dean portraying the type of disaffected youth he would later portray in Rebel Without a Cause, this 1953 program was also notable for featuring the song "Crazy Man, Crazy", one of the first dramatic TV programs to feature rock and roll.

In 1954, Dean became interested in developing an auto racing career. He purchased various vehicles after filming for East of Eden had concluded. Just before filming began on Rebel Without a Cause, he competed in his first professional event at the Palm Springs Road Races, which was held in Palm Springs, California on March 26–27, 1955. Dean achieved first place in the novice class, and second place at the main event. His racing continued in Bakersfield a month later, where he finished first in his class and third overall. Dean hoped to compete in the Indianapolis 500, but his busy schedule made it impossible.

Dean's final race occurred in Santa Barbara on Memorial Day, May 30, 1955. His brief career was put on hold when Warner Brothers barred him from all racing during the production of Giant. Dean had finished shooting his scenes and the movie was in post-production when he decided to race again. 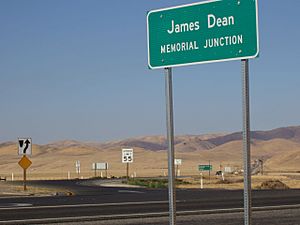 Longing to return to motor racing, Dean was scheduled to compete at a racing event in Salinas, California on September 30, 1955. Rolf Wütherich, the German mechanic from the Porsche factory who maintained car, had encouraged Dean to drive the car from Los Angeles to Salinas to break it in, accompanied Dean in the Porsche.

As they traveled to the event at approximately 5:15 p.m. a 1950 Ford Tudor was passing through an intersection while turning, ahead of the Porsche. Dean, unable to stop in time, slammed into the driver's side of the Ford resulting in Dean's car bouncing across the pavement onto the side of the highway. Dean's passenger, Wütherich, was thrown from the Porsche, while Dean was trapped in the car and sustained numerous fatal injuries. 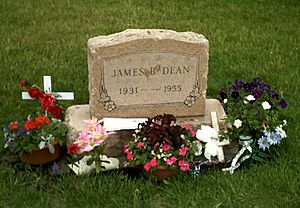 The driver of the Ford exited his damaged vehicle with minor injuries. The accident was witnessed by a number of passersby who stopped to help. A woman with nursing experience attended to Dean and detected a weak pulse, but "death appeared to have been instantaneous". Dean was pronounced dead on arrival shortly after he arrived by ambulance at the Paso Robles War Memorial Hospital at 6:20 p.m.

Dean's funeral was held on October 8, 1955 at the Fairmount Friends Church in Fairmount, Indiana. An estimated 600 mourners were in attendance, while another 2400 fans gathered outside of the building during the procession. He is buried at Park Cemetery in Fairmount. 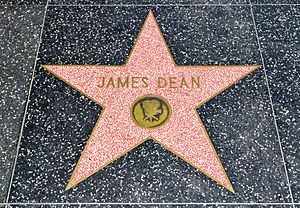 American teenagers of the mid-1950s, when Dean's major films were made, identified with Dean and the roles he played, especially that of Jim Stark in Rebel Without a Cause. The film depicts the dilemma of a typical teenager of the time, who feels that no one, not even his peers, can understand him. Dean's iconic appeal has been attributed to the public's need for someone to stand up for the young of the era. His estate still earns about $5,000,000 per year, according to Forbes Magazine.

Numerous commentators have said that Dean had a singular influence on the development of rock and roll music. According a researcher in American culture and cultural theory, Dean was the first iconic figure of youthful rebellion. The persona Dean projected in his movies, especially Rebel Without a Cause, influenced Elvis Presley and many other musicians who followed.

As rock and roll became a revolutionary force that affected the culture of countries around the world, Dean acquired a mythic status that cemented his place as a rock and roll icon. Dean himself listened to music ranging from African tribal music to the modern classical music of Stravinsky, to contemporary singers such as Frank Sinatra. While the magnetism and charisma manifested by Dean onscreen appealed to people of all ages, his persona of youthful rebellion provided a template for succeeding generations of youth to model themselves on.

All content from Kiddle encyclopedia articles (including the article images and facts) can be freely used under Attribution-ShareAlike license, unless stated otherwise. Cite this article:
James Dean Facts for Kids. Kiddle Encyclopedia.