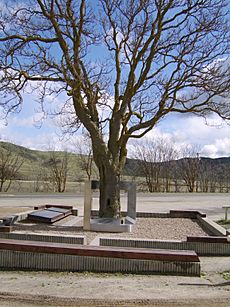 Cholame was originally a rancheria of the Salinian Indians, Rancho Cholame was an 1844 Mexican land grant. In 1867 William Welles Hollister (1818–1886) purchased Rancho Cholame. Hollister sold a half interest in the rancho to Robert Edgar Jack in 1869.

Jack studied at Maine Wesleyan Seminary, and he later was an accountant at a shipping house in New York City. In the Civil War he enlisted in the 56th New York Volunteer Infantry Regiment, and he served in Harrisburg, Pennsylvania, during the Battle of Gettysburg and then in New York to quell "anti-Negro riots" there. Near the end of the war he removed to California and became Hollister's accountant and secretary on the latter's San Justo Ranch surrounding the present city of Hollister. When that property was subdivided, the two bought the Cholame land. Jack married Hollister's daughter, Lucy Ellen (Nellie) in 1870 and became the largest wool grower in Central California, later switching to cattle and agriculture. Jack organized the County Bank of San Luis Obispo.

The land was sold to the Hearst Corporation in 1966 and is still a working cattle ranch.

On September 30, 1955, actor James Dean was killed in a traffic collision when college student Donald Turnupseed made a left turn without seeing Dean's Porsche 550 Spyder approaching at the junction of State Highways 41 and 46. On the same date in 2005, the State of California observed the 50th anniversary of Dean's death by naming the intersection as the James Dean Memorial Junction. A few hundred people, including state officials, a Dean family member, several Dean archivists and fans gathered at the junction and in Cholame to pay tribute to the actor. Near a local restaurant a memorial to Dean was erected in 1977 by a retired Japanese businessman from Kobe, Seita Ohnishi. The monument is made of stainless steel and surrounds a tree of heaven.

All content from Kiddle encyclopedia articles (including the article images and facts) can be freely used under Attribution-ShareAlike license, unless stated otherwise. Cite this article:
Cholame, California Facts for Kids. Kiddle Encyclopedia.