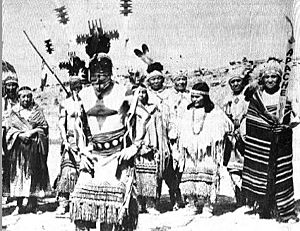 Apache are a group of culturally related Native American tribes in the Southwestern United States. These indigenous peoples of North America speak a Southern Athabaskan (Apachean) language, which is related linguistically to the languages of Athabaskan speakers of Alaska and western Canada.

The modern term Apache excludes the related Navajo people. Since the Navajo and the other Apache groups are clearly related through culture and language, they are all considered Apachean. Apachean peoples formerly ranged over eastern Arizona, northern Mexico, New Mexico, west and southwest Texas, and southern Colorado. The Apachería consisted of high mountains, sheltered and watered valleys, deep canyons, deserts, and the southern Great Plains.

Some Apacheans have moved to large metropolitan areas. The largest Apache urban communities are in Oklahoma City, Kansas City, Phoenix, Denver, San Diego, and Los Angeles. Some Apacheans were employed in migrant farm labor and relocated to the central agricultural regions of Southern California, such as the Coachella, Imperial and Colorado River valleys, where now tens of thousands of Apacheans live.

The Apachean tribes were historically very strong and strategic, opposing the Spanish and Mexican peoples for centuries. The first Apache raids on Sonora appear to have taken place during the late 17th century. In 19th-century confrontations, the U.S. Army found the Apache to be fierce warriors and skillful strategists. 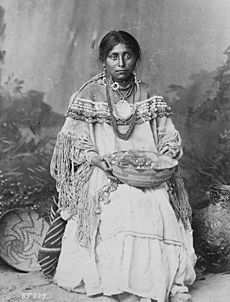 When a daughter was married, a new dwelling was built nearby for her and her husband.

Several extended families worked together as a "local group", which carried out certain ceremonies, and economic and military activities. Political control was mostly present at the local group level. Local groups were headed by a chief, a male who had considerable influence over others in the group due to his effectiveness and reputation. The chief was the closest societal role to a leader in Apachean cultures.

The office was not hereditary, and the position was often filled by members of different extended families. The chief's leadership was only as strong as he was evaluated to be—no group member was ever obliged to follow the chief. The Western Apache criteria for evaluating a good chief included: industriousness, generosity, impartiality, forbearance, conscientiousness, and eloquence in language.

Many Apachean peoples joined together several local groups into "bands". Band organization was strongest among the Chiricahua and Western Apache, while among the Lipan and Mescalero, it was weak. The Navajo did not organize local groups into bands, perhaps because of the requirements of the sheepherding economy. However, the Navajo did have "the outfit", a group of relatives that was larger than the extended family, but not as large as a local group community or a band. 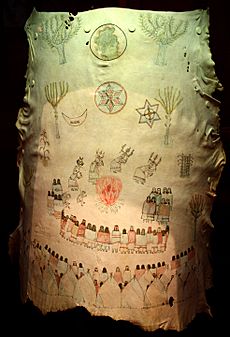 The Apachean tribes have two distinctly different kinship term systems: a Chiricahua type and a Jicarilla type. The Chiricahua-type system is used by the Chiricahua, Mescalero, and Western Apache. The Western Apache system differs slightly from the other two systems, and it has some similarities to the Navajo system.

The Jicarilla type, which is similar to the Dakota–Iroquois kinship systems, is used by the Jicarilla, Navajo, Lipan, and Plains Apache. The Navajo system is more divergent among the four, having similarities with the Chiricahua-type system. The Lipan and Plains Apache systems are very similar. 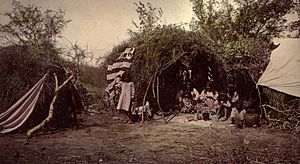 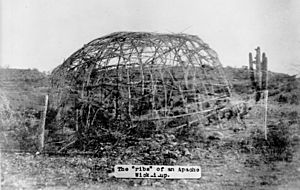 All people in the Apache tribe lived in one of three types of houses. The first of which is the teepee, for those who lived in the plains. Another type of housing is the wickiup, a 8-foot-tall (2.4 m) frame of wood held together with yucca fibres and covered in brush usually in the Apache groups in the highlands. If a family member lived in a wickiup and they died, the wickiup would be burned. The final housing is the hogan, an earthen structure in the desert area that was good for cool keeping in the hot weather of northern Mexico. 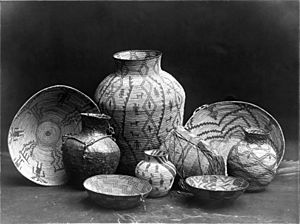 Various Apache containers: baskets, bowls and jars. The women-made baskets could hold heavy loads and were made mainly from yucca or willow leaves or juniper bark.

As the different Apachean tribes lived in different environments, the particular types of foods eaten varied according to their respective environment.

Hunting was done primarily by men, although there were sometimes exceptions depending on animal and culture (e.g. Lipan women could help in hunting rabbits and Chiricahua boys were also allowed to hunt rabbits). 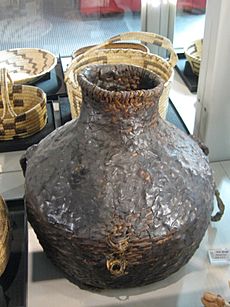 Hunting often had elaborate preparations, such as fasting and religious rituals performed by medicine men before and after the hunt. In Lipan culture, since deer were protected by Mountain Spirits, great care was taken in Mountain Spirit rituals in order to ensure smooth deer hunting. Also the slaughter of animals must be performed following certain religious guidelines (many of which are recorded in religious stories) from prescribing how to cut the animals, what prayers to recite, and proper disposal of bones. A common practice among Southern Athabascan hunters was the distribution of successfully slaughtered game. For example, among the Mescalero a hunter was expected to share as much as one half of his kill with a fellow hunter and with needy people back at the camp. Feelings of individuals concerning this practice spoke of social obligation and spontaneous generosity.

The most common hunting weapon before the introduction of European guns was the bow and arrow. Various hunting strategies were used. Some techniques involved using animal head masks worn as a disguise. Whistles were sometimes used to lure animals closer. Another technique was the relay method where hunters positioned at various points would chase the prey in turns in order to tire the animal. A similar method involved chasing the prey down a steep cliff.

Eating certain animals was taboo. Although different cultures had different taboos, some common examples of taboo animals included bears, peccaries, turkeys, fish, snakes, insects, owls, and coyotes. An example of taboo differences: the black bear was a part of the Lipan diet (although not as common as buffalo, deer, or antelope), but the Jicarilla never ate bear because it was considered an evil animal. Some taboos were a regional phenomena, such as of eating fish, which was taboo throughout the southwest (e.g. in certain Pueblo cultures like the Hopi and Zuni) and considered to be snake-like (an evil animal) in physical appearance.

The Western Apache hunted deer and pronghorns mostly in the ideal late fall season. After the meat was smoked into jerky around November, a migration from the farm sites along the stream banks in the mountains to winter camps in the Salt, Black, Gila river and even the Colorado River valleys.

The Mescalero primarily hunted deer. Other animals hunted include: bighorn sheep, buffalo (for those living closer to the plains), cottontail rabbits, elk, horses, mules, opossums, pronghorn, wild steers and wood rats. Beavers, minks, muskrats, and weasels were also hunted for their hides and body parts but were not eaten.

The main food of the Lipan was the buffalo with a three-week hunt during the fall and smaller scale hunts continuing until the spring. The second most utilized animal was deer. Fresh deer blood was drunk for good health. Other animals included beavers, bighorns, black bears, burros, ducks, elk, fish, horses, mountain lions, mourning doves, mules, prairie dogs, pronghorns, quail, rabbits, squirrels, turkeys, turtles and wood rats. Skunks were eaten only in emergencies.

Influenced by the Plains Indians, Western Apaches wore animal hide decorated with seed beads for clothing. These beaded designs historically resembled that of the Great Basin Paiute and is characterized by linear patterning. Apache beaded clothing was bordered with narrow bands of glass seed beads in diagonal stripes of alternating colors. They made buckskin shirts, ponchos, skirts and moccasins and decorated them with colorful beadwork.

Undomesticated plants and other food sources 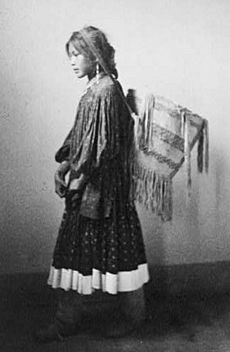 The gathering of plants and other foods was primarily done by women. However, in certain activities, such as the gathering of heavy agave crowns, men helped. Numerous plants were used for medicine and religious ceremonies in addition their nutritional usage. Other plants were utilized for only their religious or medicinal value.

In May, the Western Apache baked and dried agave crowns that were pounded into pulp and formed into rectangular cakes. At the end of June and beginning of July, saguaro, prickly pear, and cholla fruits were gathered. In July and August, mesquite beans, Spanish bayonet fruit, and Emory oak acorns were gathered. In late September, gathering was stopped as attention moved toward harvesting cultivated crops. In late fall, juniper berries and pinyon nuts were gathered.

Some interchanges between the Apache and European-descended explorers and settlers were based on trading. The Apache found they could use European and American goods. They also believed in taking what they needed, for instance, horses.

Although the following activities were not distinguished by Europeans or Euro-Americans, all Apachean tribes made clear distinctions between raiding (for profit) and war. Raiding was done with small parties with a specific economic target. The Apache waged war with large parties (often using clan members), usually to achieve retribution.

Though raiding had been a traditional way of life for the Apache, Mexican settlers objected to their stock being stolen.

All content from Kiddle encyclopedia articles (including the article images and facts) can be freely used under Attribution-ShareAlike license, unless stated otherwise. Cite this article:
Apache Facts for Kids. Kiddle Encyclopedia.