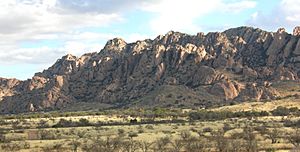 Dragoon Mountains in Southeastern Arizona, where Cochise hid with his warriors

Cochise (c. 1805 – June 8, 1874) was leader of the Chihuicahui local group of the Chokonen ("central" or "real" Chiricahua) and principal chief (or nantan) of the Chokonen band of the Chiricahua Apache. A key war leader during the Apache Wars, he led an uprising against the U.S. government which began in 1861, and persisted until a peace treaty in 1872. Cochise County, Arizona is named after him.

Cochise (or "Cheis") was one of the most noted Apache leaders (along with Geronimo and Mangas Coloradas) to resist intrusions by European Americans during the 19th century. He was described as a large man (for the time), with a muscular frame, classical features, and long black hair, which he wore in traditional Apache style. He was about six feet tall and weighed about 175 pounds. In his own language, his name Cheis meant "having the quality or strength of oak."

Cochise and the Chokonen-Chiricahua lived in the area that is now the northern region of Sonora, Mexico; New Mexico and Arizona, which they had settled in sometime before the arrival of the European explorers and colonists. As Spain and later Mexico attempted to gain dominion over the Chiricahua lands, the indigenous groups became increasingly resistant. Cycles of warfare developed, which the Apache mostly won. Eventually, the Spanish tried a different approach; they tried to make the Apache dependent (thereby placating them), giving them older firearms and liquor rations issued by the colonial government (this was called the "Galvez Peace Policy"). After Mexico gained independence from Spain and took control of this territory, it ended the practice, perhaps lacking the resources (and/or possibly the will) to continue it. The various Chiricahua bands resumed raiding in the 1830s to acquire what they wanted after the Mexicans stopped selling these goods to them.

As a result, the Mexican government began a series of military operations to stop the raiding by the Chiricahua, but they were fought to a standstill by the Apache. Cochise's father was killed in the fighting. Cochise deepened his resolve and the Chiricahua Apache pursued vengeance against the Mexicans. Mexican forces captured Cochise at one point in 1848 during an Apache raid on Fronteras, Sonora, but he was exchanged for nearly a dozen Mexican prisoners.

Beginning with early Spanish colonization around 1600, the Apache in their territory suffered tension and strife with European settlers until the greater part of the area was acquired by the United States in 1850, following the Mexican War. For a time, the two peoples managed peaceful relations. In the late 1850s, Cochise may have supplied firewood for the Butterfield Overland Mail stagecoach station at Apache Pass.

The tenuous peace did not last, as European-American encroachment into Apache territory continued. In 1861, the Bascom affair was a catalyst for armed confrontation. An Apache raiding party had driven away a local rancher's cattle and kidnapped his 12-year-old step-son (Felix Ward, who later became known as Mickey Free). Cochise and his band were mistakenly accused of the incident (which had been carried out by another band, Coyotero Apache). Army officer Lt. George Bascom invited Cochise to the Army's encampment in the belief that the warrior was responsible for the incident. Cochise maintained his innocence and offered to look into the matter with other Apache groups, but the officer tried to arrest him. Cochise escaped by drawing a knife and slashing his way out of the tent. Cochise may have been shot as he fled.

Bascom captured some of Cochise's relatives, who apparently were taken by surprise as Cochise escaped. Cochise eventually also took hostages to use in negotiations to free the Apache Indians. However, the negotiations fell apart, because the arrival of U.S. troop reinforcements led Cochise to believe that the situation was spiraling out of his control. Cochise went on to carry out about 11 years of relentless warfare, reducing much of the Mexican/American settlements in southern Arizona to a burned-out wasteland. Dan Thrapp estimated the total death toll of settlers and Mexican/American travelers may have reached 5,000, but most historians believe it was more likely a few hundred. The mistaken arrest of Cochise by Lt. Bascom is still remembered by the Chiricahua's descendants today, who describe the incident as "Cut the Tent".

Cochise joined with his father-in-law Mangas Coloradas (Red Sleeves, Kan-da-zis Tlishishen), the powerful Chihenne-Chiricahua chief, in a long series of retaliatory skirmishes and raids on the white settlements and ranches. The Battle of Dragoon Springs was one of these engagements. During the raids, many people were killed, but the Apache quite often had the upper hand. The United States was distracted by its own internal conflict of the looming Civil War, and had begun to pull military forces out of the area. It did not have the resources to deal with the Apache. Additionally, the Apaches were highly adapted to living and fighting in the harsh terrain of the southwest. Many years passed before the US Army, using tactics conceived by General George Crook and later adopted by General Nelson A. Miles, were able to effectively challenge the Apache warrior on his own lands.

At Apache Pass in 1862, Cochise and Mangas Coloradas, with around 500 fighters, held their ground against a New Mexico-bound force of California volunteers under General James Henry Carleton until carriage-mounted howitzer artillery fire was brought to bear on their positions in the rocks above.

According to scout John C. Cremony and historian Dan L. Thrapp, the howitzer fire sent the Apaches into an immediate retreat. The Battle of Apache Pass was one of the rare pitched battles the Apaches fought against the United States Army. Normally, the Apaches' tactics involved guerrilla-style warfare. Capt. Thomas Roberts was persuaded by this conflict that it would be best to find a route around Apache Pass, which he did. Gen. Carleton continued unhindered to New Mexico and subsequently took over as commander of the territory.

In January 1863, Gen. Joseph R. West, under orders from Gen. Carleton, captured Mangas Coloradas by luring him into a conference under a flag of truce. During what was to be a peaceful parley session, the Americans took Mangas Coloradas prisoner and later murdered him. This fanned the flames of enmity between the encroaching Americans and the Apache. Cochise believed that the Americans had violated the rules of war by capturing and killing Mangas Coloradas during a parley session. Cochise and the Apache continued their raids against U.S. and Mexican settlements and military positions throughout the 1860s. 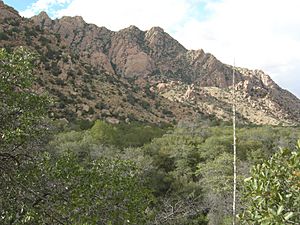 Following various skirmishes, Cochise and his men were gradually driven into Arizona's Dragoon Mountains, but used the mountains for cover and as a base from which to continue attacks against white settlements. Cochise evaded capture and continued his raids against white settlements and travelers until 1872. In 1871, General Oliver O. Howard was ordered to find Cochise, and in 1872, Howard was accompanied by his aide 1st Lt Joseph Alton Sladen and Captain Samuel S. Sumner, and they came to Arizona to negotiate a peace treaty with Cochise. Tom Jeffords, the Apache leader's only white friend, was also present and a treaty was successfully negotiated on October 12, 1872. Based on statements by Sumner and descriptions by Sladen, modern historians such as Robert M. Utley believe that Cochise's Spanish interpreter was Geronimo.

After the peace treaty, Cochise retired to his new reservation, the short-lived Chiricahua Reservation (1872–1876), with his friend Jeffords as agent. Cochise died of natural causes (probably abdominal cancer) in 1874. He was buried in the rocks above one of his favorite camps in Arizona's Dragoon Mountains, now called the Cochise Stronghold. Only his people and Tom Jeffords knew the exact location of his resting place, and they took the secret to their graves.

Many of Cochise's descendants reside at the Mescalero Apache Reservation, near Ruidoso, New Mexico, as well as the Fort Sill Apache Tribe Chiricahua Warm Springs Apache in Oklahoma.

The best-selling novel by Elliott Arnold in 1947 titled Blood Brother gives a fictionalized account of the latter part of the struggle and friendship between Jeffords and Cochise.

John Ford's representation of Cochise in the 1948 film Fort Apache was also positive to Native Americans, although in that film Cochise spoke Spanish (a language the Apaches had learned from their Mexican enemies). Jeff Chandler again portrayed Cochise in the 1952 film The Battle at Apache Pass. Chandler also played Cochise in Taza, Son of Cochise (1954), with Rock Hudson as his son, Taza The film Conquest of Cochise released by Columbia Pictures in 1953 and starring John Hodiak as Cochise also showed Cochise as a caring man who wanted peace with whites. Broken Arrow was a TV Western series that told a fictionalized account of the historical relationship between Jeffords (John Lupton) and Cochise (Michael Ansara); the show was aired on ABC in prime time from 1956 through 1958. Cochise was portrayed by Jeff Morrow in a 1961 episode of Bonanza.

"Cochise" is an instrumental piece in the album "Guitars", by Mike Oldfield.

The 2008 novel by Melody Groves titled Arizona War: A Colton Brothers Saga gives a fictionalized account of Cochise's dealings with the main characters, James and Trace Colton, during the early 1860s including the Bascom Affair of 1861 and the New Mexico-bound force of California volunteers under General James Henry Carleton during 1862.

Wes Studi portrays Cochise in A Million Ways to Die in the West despite the film being set in 1882, eight years after Cochise's death.

A statue of Cochise is shown as a meeting point between friends Jaime Reyes and Tye Longshadow in the Young Justice episode "Beneath."

A small lunar crater was named after Cochise, located near the landing site in the Taurus–Littrow valley, by the astronauts of Apollo 17.

All content from Kiddle encyclopedia articles (including the article images and facts) can be freely used under Attribution-ShareAlike license, unless stated otherwise. Cite this article:
Cochise Facts for Kids. Kiddle Encyclopedia.