Kids Encyclopedia Facts
This page is about the Native American tribe. For other uses, see Mescalero (disambiguation).

In the nineteenth century, the Mescalero opened their reservation to other Apache bands, such as the Mimbreno and the Chiricahua, many of whom had been imprisoned in Florida. The Lipan Apache also joined the reservation. Their descendants are enrolled in the Mescalero Apache Tribe. 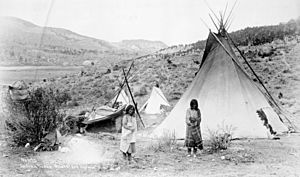 Two Mescalero women, with tipis and ramada (to the left).

Originally established on May 27, 1873, by Executive Order of President Ulysses S. Grant, the reservation was first located near Fort Stanton. The present reservation was established in 1883. It has a land area of 1,862.463 km² (719.101 sq mi), almost entirely in Otero County. The 463,000-acre reservation lies on the eastern flank of the Sacramento Mountains and borders the Lincoln National Forest. A small unpopulated section is in Lincoln County just southwest of the city of Ruidoso. U.S. Route 70 is the major highway through the reservation.

The tribe has an economy based largely on ranching and tourism. The mountains and foothills are forested with pines; resource and commercial development is managed carefully by the Mescalero Apache Tribal Council. The Mescalero Apache developed a cultural center near the tribal headquarters on U.S. Route 70 in the reservation's largest community of Mescalero. On display are tribal artifacts and important historical information. The tribe also operates another, larger museum on the western flank of the Sacramento Mountains in Dog Canyon, south of Alamogordo.

The tribe developed and owns the Inn of the Mountain Gods Resort and Casino ("IMG") within Lincoln National Forest. As part of the IMG operation, the tribe also owns and manages Ski Apache under contract as a concession with the US Forest Service. It is the southernmost major ski area in North America. In January 2012, Ski Apache celebrated its 50th anniversary.

The ski area is situated adjacent to the massive peak of Sierra Blanca a 12,003-foot (3,659 m) mountain. It is the southernmost alpine peak in the Continental United States and is part of the Sacramento Mountains. Using the EPA's Level III Ecoregion System, derived from Omernik, this mountain is included in the "Arizona/New Mexico Mountains," which is south of the "Southern Rocky Mountains" of northern New Mexico. Sierra Blanca peak, located on the reservation, is sacred ground for the Mescalero Apache Tribe. They do not allow access without a permit.

The Mescalero language is a Southern Athabaskan language which is a subfamily of the Athabaskan and Dené–Yeniseian families. Mescalero is part of the southwestern branch of this subfamily; it is very closely related to Chiricahua, and more distantly related to Western Apache. These are considered the three dialects of Apachean. Although Navajo is a related Southern Athabaskan language, its language and culture are considered distinct from those of the Apache.

The Mescalero Apache were primarily a nomadic mountain people. They traveled east on the arid plains to hunt the buffalo and south into the desert for gathering Mescal Agave. Spanish colonists associated them with this plant and named them Mescalero Apache. The Mescalero Apache, along with the other Apache groups, lived by traditional hunting and gathering. If conditions were poor, they raided other tribes, and Spanish, Mexican and American settlers to survive.

The Mescalero's autonym, or name for themselves, is Shis-Inday ("People of the Mountain Forests") or Mashgalénde (“People close to the mountains”). The Navajo, another Athabascan-speaking tribe, call the Mescalero Naashgalí Dineʼé. Like other Apache peoples they often identify simply as Inday / Indee ("The People"). Neighboring Apache bands called the Mescalero Nadahéndé ("People of the Mescal"), because the mescal agave (Agave parryi) was a staple food source for them. In times of need and hunger, they depended on stored mescal for survival. Since 1550 Spanish colonists referred to them as the Mescalero.

Originally the different Mescalero bands and local groups ranged in an area between the Rio Grande in the west and the eastern and southern edge of the Llano Estacado and the southern Texas Panhandle in Texas in the east; from present-day Santa Fe in the northwest and the Texas Panhandle in the northeast, down to the Big Bend of Texas and what became the Mexican provinces of Chihuahua and Coahuila to the south. The diverse landscape of this area has high mountains up to 12,000 feet, as well as watered and sheltered valleys, surrounded by arid semi-deserts and deserts, deep canyons and open plains. The Mescalero Apache Reservation is located at geographical coordinates 33°10′42″N 105°36′44″W﻿ / ﻿33.17833°N 105.61222°W﻿ / 33.17833; -105.61222.

Since each band of Mescalero had the right to use the resources of deer and plants of the neighboring groups, the different bands felt at home in any area of their wide tribal territory. The Mescalero bands often ranged widely for hunting, gathering, warring and raiding. They called their home Indeislun Nakah ("people, forming a group, when they are there," "place where people get together"). When many Mescalero bands were displaced by the enemy Comanche from the Southern Plains in northern and central Texas between 1700–1750, they took refuge in the mountains of New Mexico, western Texas, and Coahuila and Chihuahua in Mexico. Some southern Mescalero bands, together with Lipan, lived in the Bolsón de Mapimí, moving between the Nazas River, the Conchos River and the Rio Grande to the north. 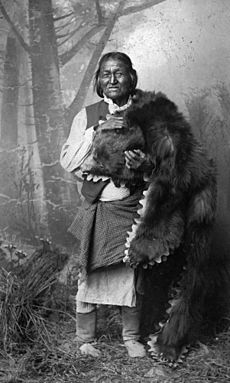 All content from Kiddle encyclopedia articles (including the article images and facts) can be freely used under Attribution-ShareAlike license, unless stated otherwise. Cite this article:
Mescalero Facts for Kids. Kiddle Encyclopedia.