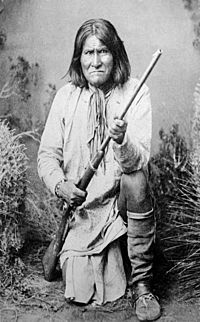 Geronimo (Chiricahua Goyaałé 'One Who Yawns'; often spelled Goyathlay in English), (June 16, 1829–February 17, 1909) was a well-known Native American leader, but not chief, of the Chiricahua Apache tribe, but he was a Bedonkohe Apache. He was born in what is now the state of New Mexico and was also a respected medicine man. The name Geronimo was given to him by Mexican soldiers who either called to Saint Jerome while fighting him or transcribed his name into Spanish wrong. He led 38 Apache men, women, and children to resist being sent to reservations by the United States government or being captured by the Mexican Army. He surrendered in 1886. After that, he was moved to many different forts in the United States. In 1904 during the world fair in St. Louis, he sold souvenirs and pictures of himself. He died in 1909 from pneumonia.

All content from Kiddle encyclopedia articles (including the article images and facts) can be freely used under Attribution-ShareAlike license, unless stated otherwise. Cite this article:
Geronimo Facts for Kids. Kiddle Encyclopedia.