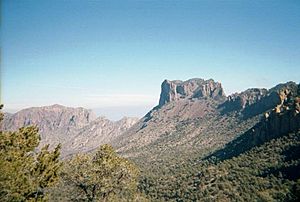 Casa Grande is a prominent peak in the Chisos Mountains of the Big Bend area of west Texas. The view is from the Pinnacles Trail in Big Bend National Park.

The Big Bend is a colloquial name of a geographic region in the western part of the state of Texas in the United States along the border with Mexico, roughly defined as the counties north of the prominent northward bend in the Rio Grande as it passes through the gap between the Chisos Mountains in Texas and the Sierra Madre Oriental in Mexico. It is sometimes loosely defined as the part of Texas south of U.S. Highway 90 and west of the Pecos River. The region includes three counties in Texas: Brewster, Jeff Davis and Presidio.

The region is sparsely populated, arid, and rugged, containing the Chisos and the Davis Mountain ranges. The region has more than one million acres (4,000 km²) of public lands, including Big Bend National Park and Big Bend Ranch State Park along the north side of the Rio Grande. It is also the home of the McDonald Observatory.

The largest towns in the region are Alpine, Presidio, Marfa, Sanderson, Terlingua, and Marathon.

All content from Kiddle encyclopedia articles (including the article images and facts) can be freely used under Attribution-ShareAlike license, unless stated otherwise. Cite this article:
Big Bend (Texas) Facts for Kids. Kiddle Encyclopedia.