Kids Encyclopedia Facts
Not to be confused with Big Bend National Park or Big Bend of the Colorado State Recreation Area.

Big Bend Ranch State Park is a 311,000-acre (126,000 ha) state park located on the Rio Grande in Brewster and Presidio counties, Texas. It is the largest state park in Texas. The closest major town is Presidio, Texas, where the state park's head office is located. 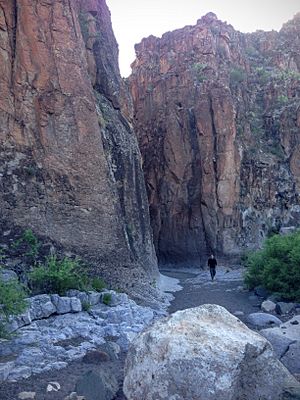 Big Bend Ranch is located adjacent to Big Bend National Park and shares the national park's Chihuahuan Desert ecosystem. However, in one significant aspect the state park is managed very differently from the nearby national park, as the state park encompasses a network of cattle ranches operated according to the principle of the open range. A herd of longhorn cattle is based here, and there is a semi-annual longhorn roundup.

The Big Bend Ranch manages 23 miles (37 km) of frontage along the Rio Grande, and river rafting is popular here. Away from the river, visitors can hike, backpack, go horseback riding or enjoy mountain biking in the Big Bend Ranch's substantial backcountry. The park is open year round and an admission fee is charged.

Desert vegetation dominates the park including lechuguilla and grama. Other common plants include sotol, ocotillo and mesquite. Along the Rio Grande and around some of the springs in the park are reeds, willows, and cottonwood and ash trees. The park contains most of the existing populations of the federally threatened Hinckley oak. 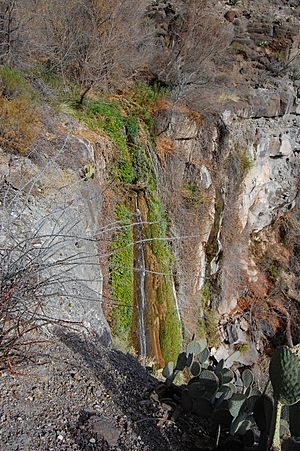 The Big Bend Ranch is home to Madrid Falls, the second highest waterfall in Texas. The terrain around Madrid Falls makes it difficult to access.

Big Bend Ranch State Park was expected to enjoy an estimated 2,500 visitors in 2008, a relatively low level of visitation for a park of its size.

A number of companies in the area offer tours of the Rio Grande River, with most being based out of Terlingua, Texas. They offer guided rafting trips, canoe trips, guided hikes and backroad tours that are structured to provide education about the region's history, geology, wildlife and plant life.

The Nature Conservancy of Texas announced in November 2008 that they had purchased the Fresno Ranch, a 7,000-acre (2,800 ha) inholding within the state park, for the purpose of planning the transfer of the land to the state park for integrated park management purposes and eventual public enjoyment. The price was said to be $2.6 million. The ranch, which occupied several comparatively well-watered parcels of land within the park's boundaries, was in the southeastern quadrant of the park.

All content from Kiddle encyclopedia articles (including the article images and facts) can be freely used under Attribution-ShareAlike license, unless stated otherwise. Cite this article:
Big Bend Ranch State Park Facts for Kids. Kiddle Encyclopedia.