The gray fox (Urocyon cinereoargenteus), or grey fox, is an omnivorous mammal of the family Canidae, widespread throughout North America and Central America. This species and the diminutive island fox of the California Channel Islands, are the only living members of the genus Urocyon.

Though it was once the most common fox in the eastern United States, and still is found there, human advancement and deforestation allowed the red fox to become more dominant. The Pacific States still have the gray fox as a dominant.

It is the only American canid that can climb trees.

The gray fox is mainly distinguished from most other canids by its grizzled upper parts, black stripe down its tail and strong neck.

It is different from the red fox by the obvious lack of "black stockings" that stand out on the red fox, a stripe of black hair that runs along the middle of its tail, and individual guard hairs being banded with white, gray, and black.

The gray fox displays white on the ears, throat, chest, belly and hind legs. In contrast to all Vulpes and related (Arctic and fennec) foxes, the gray fox has oval (instead of slit-like) pupils. 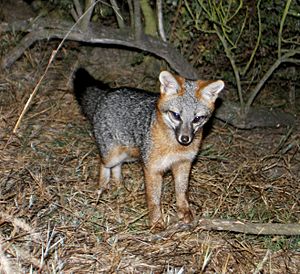 Gray fox kit at the Palo Alto Baylands in California

The species occurs throughout most rocky, wooded, brushy regions of the southern half of North America from southern Canada (Manitoba through southeastern Quebec) to the northern part of South America (Venezuela and Colombia), excluding the mountains of northwestern United States. It is the only canid whose natural range spans both North and South America. In some areas, high population densities exist near brush-covered bluffs. 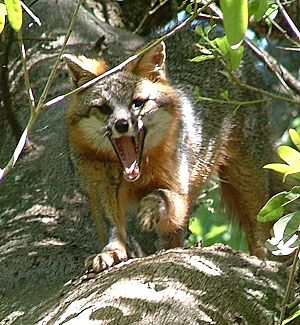 The gray fox's ability to climb trees is shared only with the Asian raccoon dog and the New Guinea Wild Singing Dog among canids. Its strong, hooked claws allow it to scramble up trees to escape many predators, such as the domestic dog or the coyote, or to reach tree-bound or arboreal food sources. It can climb branchless, vertical trunks to heights of 18 meters and jump from branch to branch. It descends primarily by jumping from branch to branch, or by descending slowly backwards like a domestic cat.

The gray fox is primarily nocturnal or crepuscular and makes its den in hollow trees, stumps or appropriated burrows during the day. Such gray fox tree dens may be located 30 ft above the ground. Prior to European colonization of North America, the red fox was found primarily in boreal forest and the gray fox in deciduous forest. 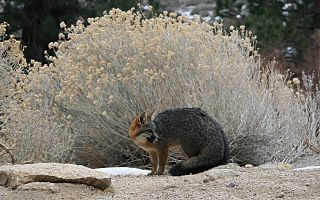 The gestation period lasts approximately 53 days. Litter size ranges from 1 to 7, with a mean of 3.8 young per female. The sexual maturity of females is around 10 months of age. Kits begin to hunt with their parents at the age of 3 months. By the time that they are four months old, the kits will have developed all their adult teeth and can now easily forage on their own.

Dens are built in brushy or wooded regions and are less obvious than the dens of the red fox. Logs, trees, rocks, burrows, or abandoned dwellings serve as suitable den sites.

A gray fox at night

The gray fox is an omnivorous, solitary hunter. It frequently preys on the eastern cottontail (Sylvilagus floridanus) in the eastern U.S., though it will readily catch voles, shrews, and birds. In California, the gray fox primarily eats rodents, followed by lagomorphs, e.g. jackrabbit, brush rabbit, etc. In some parts of the Western United States (such as in the Zion National Park in Utah), the gray fox is primarily insectivorous and herbivorous. Fruit is an important component of the diet of the gray fox and they seek whatever fruits are readily available, generally eating more vegetable matter than does the red fox (Vulpes vulpes).

All content from Kiddle encyclopedia articles (including the article images and facts) can be freely used under Attribution-ShareAlike license, unless stated otherwise. Cite this article:
Gray fox Facts for Kids. Kiddle Encyclopedia.