Lagomorpha is a mammal order. It includes pikas, rabbits and hares. Although the lagomorphs look like rodents, they are actually not because they have four incisors on the upper jaw, not two like in rodents, and they eat plants, not meat too, like rodents. They were classified under rodents until the 20th century. They are divided into two families, Leporidae, hares and rabbits, and Ochotonidae, the pikas.

Lagomorphs are similar to other mammals in that they all have hair, four limbs (i.e., they are tetrapods), and mammary glands and are endothermic. They differ in that they have a mixture of "primitive" and "advanced" physical traits.

Differences between lagomorphs and other mammals

Although lagomorphs are more closely related to rodents than any other mammals, the two orders still have some major differences. Lagomorphs differ from rodents in that the former have four incisors in the upper jaw (not two, as in the Rodentia). Also, lagomorphs are almost strictly herbivorous, unlike rodents, many of which will eat both meat and vegetable matter. They resemble rodents, however, in that their incisor teeth grow continuously throughout their lives, thus necessitating constant chewing on fibrous food to prevent the teeth from growing too long.

Similarly to the rodents, bats, and some mammalian insectivores, they have a smooth-surfaced cerebrum.

Differences between families of lagomorphs

Rabbits and hares move by jumping, pushing off with their strong hind legs and using their forelimbs to soften the impact on landing. Pikas lack certain skeletal modifications present in leporids, such as a highly arched skull, an upright posture of the head, strong hind limbs and pelvic girdle, and long limbs. Also, pikas have a short nasal region and entirely lack a supraorbital foramen, while leporids have prominent supraorbital foramina and nasal regions. 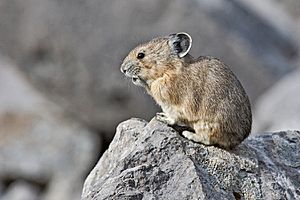 Pikas, also known as conies, are entirely represented by the family Ochotonidae and are small mammals native to mountainous regions of western North America, and Central Asia. They are mostly about 15 cm (6 in) long and have greyish-brown, silky fur, small rounded ears, and almost no tail. Their four legs are nearly equal in length. Some species live in scree, making their homes in the crevices between broken rocks, while others construct burrows in upland areas. The rock-dwelling species are typically long-lived and solitary, have one or two litters of a small number of young each year and have stable populations. The burrowing species, in contrast, are short-lived, gregarious and have multiple large litters during the year. These species tend to have large swings in population size. The social behaviour of the two groups also differs: the rock dwellers aggressively maintain scent-marked territories, while the burrowers live in family groups, interact vocally with each other and defend a mutual territory. Pikas are diurnal and are active early and late in the day during hot weather. They feed on all sorts of plant material. As they do not hibernate, they make "haypiles" of dried vegetation which they collect and carry back to their homes to store for use during winter. 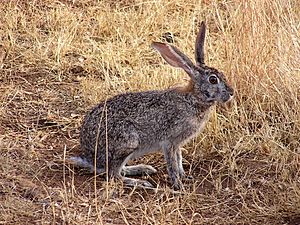 Hares, members of genus Lepus of family Leporidae, are medium size mammals native to all the continents except South America, Australia and Antarctica. North American jackrabbits are actually hares. Species vary in size from 40 to 70 cm (16 to 28 in) in length and have long powerful back legs, and ears up to 20 cm (8 in) in length. Although usually greyish-brown, some species turn white in winter. They are solitary animals and several litters of young are born during the year in a form, a hollow in the ground amongst dense vegetation. The young are born fully furred and active. Hares eat plant material including stripping the bark off tree trunks. They are preyed upon by large mammalian carnivores and birds of prey.

Rabbits, members of family Leporidae outside Lepus, are generally much smaller than hares and include the rock hares and the hispid hare. They are native to Europe, parts of Africa, Central and Southern Asia, North America and much of South America. They inhabit both grassland and arid regions. They vary in size from 20 to 50 cm (8 to 20 in) and have long, powerful hind legs, shorter forelegs and a tiny tail. The colour is some shade of brown, buff or grey and there is one black species and two striped ones. Domesticated rabbits come in a wider variety of colours. Although most species live and breed in burrows, the cottontails and hispid hares have forms (nests). Some of the burrowing species are colonial, but most are solitary or may feed together in small groups. Rabbits play an important part in the terrestrial food chain, eating a wide range of forbs, grasses, and herbs, and being part of the staple diet of many carnivorous species.

Lagomorphs are widespread around the world and inhabit every continent except Antarctica. However, they are not found in most of the southern cone of South America, in the West Indies, Indonesia or Madagascar, nor on many islands. Although they are not native to Australia, humans have introduced them there and they have successfully colonized many parts of the country and caused disruption to native species.

Like other herbivores, lagomorphs have to deal with a bulky diet in which the cell walls are composed of cellulose, a substance which mammalian digestive enzymes are unable to break down. Despite this, lagomorphs have developed a way of extracting maximum nourishment from their diet. First they bite off and shred plant tissues with their incisors and then they grind the material with their molars. Digestion continues in the stomach and small intestine where nutrients are absorbed. After that, certain food remains get diverted into the caecum, a blind-ended pouch. Here, they are mixed with bacteria, yeasts and other micro-organisms that are able to digest cellulose and turn it into sugar, a process known as hindgut fermentation. Other faecal matter passes along the colon and is excreted in the normal way as small, dry pellets. About four to eight hours after the meal, the contents of the caecum pass into the colon and are eliminated as soft, moist pellets known as cecotropes. These are immediately eaten by the lagomorph, which can thus extract all the remaining nutrients in the food.

Many lagomorphs breed several times a year and produce large litters. This is particularly the case in species that breed in underground, protective environments such as burrows. The altricial young of rabbits, called kittens, are born naked and helpless after a short gestation period and the mother can become pregnant again almost immediately after giving birth. The mothers are able to leave these young safely and go off to feed, returning at intervals to feed them with their unusually rich milk. In some species, the mother only visits and feeds the litter once a day but the young grow rapidly and are usually weaned within a month. Hares live above ground and their litters, containing leverets, are born in "forms" concealed among tussocks and scrub. They have a strategy to prevent predators from tracking down their litter by following the adults' scent. They approach and depart from the nesting site in a series of immense bounds, sometimes moving at right angles to their previous direction. The young are precocial and a small number are born after a longer gestation period, already clad in short fur and able to move around.

All content from Kiddle encyclopedia articles (including the article images and facts) can be freely used under Attribution-ShareAlike license, unless stated otherwise. Cite this article:
Lagomorpha Facts for Kids. Kiddle Encyclopedia.