Hares are fast runners over grassland

Hares are mammals of the order Lagomorpha, in the same family as the rabbit.

Their diet (the food they eat) resembles what rabbits eat. They graze on grass and leafy weeds.

Hares are very fast-running animals. The European brown hare (Lepus europaeus) runs at speeds up to 56 km/h (35 mph). The five species of jackrabbit found in central and western North America can run at 64 km/h (40 mph), and can leap up to 3m (ten feet) at a time.

A hare less than one year old is called a leveret. The collective noun for a group of hares is a "drove".

Normally a shy animal, the European brown hare changes its behaviour in spring, when hares chase one another around meadows. 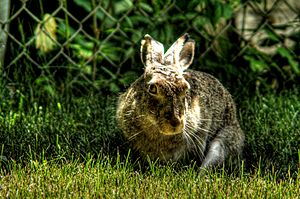 Hares do not bear their young below ground in a burrow as do other leporids, but rather in a shallow depression or flattened nest of grass called a form. Young hares are adapted to the lack of physical protection, relative to that afforded by a burrow, by being born fully furred and with eyes open. They are hence precocial, and are able to fend for themselves soon after birth. By contrast, the related rabbits and cottontail rabbits are altricial, having young that are born blind and hairless.

All rabbits (except the cottontail rabbits) live underground in burrows or warrens, while hares (and cottontail rabbits) live in simple nests above the ground, and usually do not live in groups. Hares are generally larger than rabbits, with longer ears, and have black markings on their fur. Hares have not been domesticated, while rabbits are raised for food and kept as house pets. The domestic pet known as the "Belgian Hare" is a rabbit that has been selectively bred to resemble a hare.

Hares have jointed, or kinetic, skulls, unique among mammals. They have 48 chromosomes while rabbits have 44. 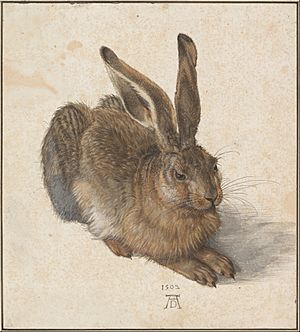 Hares and rabbits are plentiful in many areas, adapt to a wide variety of conditions, and reproduce quickly, so hunting is often less regulated than for other varieties of game. In rural areas of North America and particularly in pioneer times, they were a common source of meat. Because of their extremely low fat content, they are a poor choice as a survival food.

Hares can be prepared in the same manner as rabbits — commonly roasted or taken apart for breading and frying.

Jugged hare, known as civet de lièvre in France, is a whole hare, cut into pieces, marinated, and cooked with red wine and juniper berries in a tall jug that stands in a pan of water. It traditionally is served with the hare's blood (or the blood is added right at the very end of the cooking process) and port wine.

According to Jewish tradition, the hare is among mammals deemed not kosher, and therefore not eaten by observant Jews. According to Islamic dietary laws, Muslims deem coney meat (rabbit, pika, hyrax) halal, and in Egypt, hare and rabbit are popular meats for mulukhiyah (jute leaf soup), especially in Cairo.

All content from Kiddle encyclopedia articles (including the article images and facts) can be freely used under Attribution-ShareAlike license, unless stated otherwise. Cite this article:
Hare Facts for Kids. Kiddle Encyclopedia.