The antelope jackrabbit (Lepus alleni), found in Southern Arizona and Northwestern Mexico, is a species of North American hare. Within this range, it occupies dry desert areas. This species is placed in family Leporidae, which is within order Lagomorpha. Male and female antelope jackrabbits are identical in appearance. This species is large in size with long, pointed ears and a distinct coat coloration. The antelope jackrabbit has a white belly, light grey sides, a back peppered with black, and orange coloration on the neck and chest. It is similar to species like the black-tailed jackrabbit and white-sided jackrabbit. It is most active during twilight (crepuscular) and during the night (nocturnal), but can be active during the day when conditions are favorable (heavy cloud coverage). It feeds on cacti, mesquite leaves, and other vegetation.

In the United States, the antelope jackrabbit is found in parts of Arizona and states like Chihuahua, Nayarit, Sinaloa and Sonora in Northwestern Mexico. Compared to the other hare species present in North America, the antelope jackrabbit's range is limited. This species does not inhabit areas further east than the sky islands in Arizona and the Sierra Madre Occidental in Mexico. It also does not radiate west of Florence, Arizona. As of July 2017 it had been spotted and photographed by a National Park Ranger in the Lake Mead Recreational Area in Nevada. 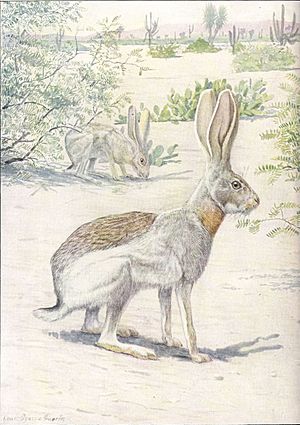 Artistic depiction of an antelope jackrabbit

The antelope jackrabbit feeds on cacti, grasses, and other leafy vegetation. This species has been observed digging and eating soil in an attempt to intake minerals and other nutrients. They can be classified as folivores and graminivores.

Antelope jackrabbits breed from December to September and the gestation period is roughly six weeks long. Females have up to four litters per year ranging from one to five individuals. A baby hare, called a leveret, is born precocial; its eyes are open, it is active, and covered with fur. Young are born in shallow dirt nests that are formed by scraping the surface of the ground.

Known predators of the antelope jackrabbit include bobcats, coyotes, and golden eagles. Since antelope jackrabbits attract predators that are also a threat to livestock, they are hunted by humans to reduce potential problems. This species is also hunted for human consumption or for their valuable pelt.

There are three recognized subspecies:

All content from Kiddle encyclopedia articles (including the article images and facts) can be freely used under Attribution-ShareAlike license, unless stated otherwise. Cite this article:
Antelope jackrabbit Facts for Kids. Kiddle Encyclopedia.