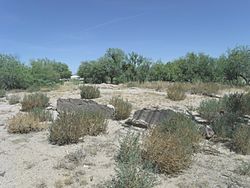 The Ruins of Levi Ruggles House. The house was built in 1866 and the ruins are located in Ruggles St. between Quartz and Willow Streets. 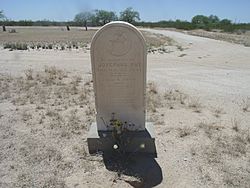 The Tombstone of Josephus "Joe" Phy. 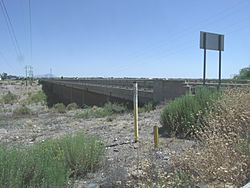 The historic Florence Bridge originally built in 1885 over the Gila River and rebuilt in 1909.

Florence (O'odham: S-auppag) is a town, 61 miles (98 km) southeast of Phoenix, in Pinal County, Arizona, United States. Florence, which is the county seat of Pinal County, is one of the oldest towns in that county and is regarded as a National Historic District with over 25 buildings listed on the National Register of Historic Places. The population of Florence was 25,536 at the 2010 census.

The area where the current town of Florence is located was once inhabited by the members of the Athabascans, ancestors of the San Carlos Apache tribe. Prior to the establishment of the town, the Gila River served as a part of the border between the United States and Mexico. In 1853, the Gadsden Purchase extended American territory well south of the Gila.

Levi Ruggles, a veteran of the American Civil War, founded the town of Florence on the south bank of the Gila River. He came to Arizona Territory in 1866 as a U.S. Indian Agent. Recognizing the agricultural potential of the valley, he found an easily fordable crossing on the Gila River and surveyed a townsite there. With the aid of Governor R.C. McCormick, he secured a post office in August of the same year. Ruggles held numerous public offices including that of Territorial Legislator. Florence became the county seat in the newly formed Pinal County. Silver was discovered in 1875 in the nearby mountains which led to the creation of the famous Silver King Mine.

In 1870, Fred Adams founded a farming community two miles west of the original Florence townsite. The farming town had stores, homes, a post office, a flour mill, and water tanks, It was named Adamsville. In the 1900s (decade), the Gila River overflowed after a storm and ran over its banks. Most of the small town was wiped out and the residents moved to Florence. The area where the town was established is now a ghost town and is currently within the boundaries of Florence. At the junction of Highway 79 and 287 there is a historical marker about Adamsville.

A canal was built in the 1880s which enabled water from the Gila River to be diverted for irrigation. Farming and ranching then played a major role in Florence’s economy. All of the federal land transactions for Southern Arizona were conducted in Florence until 1881, when the Federal Land Office was moved to Tucson.

One of the most notable gunfights in the Old Southwest occurred in Florence. Sheriff Pete Gabriel hired thirty-nine year old Joseph (Joe) Phy as his deputy in 1883. Gabriel decided to not run for sheriff in 1886 and supported his deputy Phy for the job. Later Gabriel withdrew his support because of personal differences with Phy. The two friends became bitter enemies and had a confrontation on May 31, 1888 in the Tunnel Saloon. A gunfight ensued and spread to the street. Both men received gunshot wounds. Phy died a few hours after the gunfight, but Gabriel survived the encounter and died 10 years later.

The second Pinal County Courthouse was built in 1891. It was the site where the trials of three notorious women were presented. They were Pearl Heart, Eva Dugan and Winnie Ruth Judd, known as the "Trunk Murderess". Pearl Heart (birth surname: Hart) was an outlaw of the American Old West. She committed one of the last recorded stagecoach robberies in the United States; her crime gained notoriety primarily because of her gender. She was tried in 1899 and was acquitted, however the judge ordered a second trial and she was found guilty and sentenced to five years in prison.

The historic Florence Bridge originally built in 1885 over the Gila River and rebuilt in 1909.

In 1940, the cowboy movie star Tom Mix was killed when he lost control of his speeding Cord Phaeton convertible and rolled into a dry wash (now called the Tom Mix Wash) in Florence, Arizona. Mix, who was a regular tenant in the Ross/Fryer-Cushman House, was returning to Florence from Tucson. There is a 2-foot–tall iron statue of a riderless horse with a plaque on the site of the accident.

According to the United States Census Bureau, the town has a total area of 8.3 square miles (21 km2), all land. The city has the typical hot desert climate of lowland Arizona, with brutal summers and warm winters.

°Florence is considered the hub of Pinal County filled with historic buildings and rich history.

°Florence is the location of the 2nd Anthem development in the state of Arizona being built by Pulte and Del Webb. It is located six miles to the northwest of downtown historic Florence.

°The town's preserved Main Street and open desert scenery were the setting of the major motion picture Murphy's Romance.

°Florence is the host of the annual "Country Thunder" music festival.

°The town is also the home of the Florence Jr. Parada Rodeo, the oldest junior rodeo in the United States.

Florence has various historic structures. Some are listed in the National Register of Historic Places while others are considered historical by the Florence Historic District Advisory Commission.

All content from Kiddle encyclopedia articles (including the article images and facts) can be freely used under Attribution-ShareAlike license, unless stated otherwise. Cite this article:
Florence, Arizona Facts for Kids. Kiddle Encyclopedia.