Coolidge is a city in Pinal County, Arizona, United States. According to the 2010 census, the city's population is 11,825.

Coolidge is home of the Casa Grande Ruins National Monument. The monument was the first historic site to receive protected status by the United States Government in 1892. Coolidge is also home to both Central Arizona College and the Central Arizona Valley Institute of Technology.

Coolidge was founded in 1925 and incorporated as a city in 1945. It is named for Calvin Coolidge, the 30th President of the United States.

The town was home to a station for Amtrak. 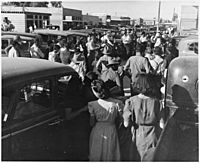 Main street of Coolidge on a Saturday afternoon during cotton harvest (ca. 1922–1953)

Up until the 1950s, the city's economy was completely dependent on mining and cotton. It has since diversified to include manufacturing, regional trade, and services for agricultural producers and farm families.

In 2019, Nikola Motor Company purchased 389 acres (157 ha) in Coolidge to start building a factory that will produce zero-emissions heavy trucks by 2021.

The town was home to a station for Amtrak; it closed in June 1996.

The Coolidge Municipal Airport, which has two asphalt runways, is located 5 miles (8.0 km) southeast of the city and had 56,050 aircraft operations in the yearly period ending April 2, 2020. The closest major airports to Coolidge are Phoenix Sky Harbor International Airport and Tucson International Airport. Casa Grande Shuttle provides an airport shuttle to Sky Harbor.

All content from Kiddle encyclopedia articles (including the article images and facts) can be freely used under Attribution-ShareAlike license, unless stated otherwise. Cite this article:
Coolidge, Arizona Facts for Kids. Kiddle Encyclopedia.