The Gila River ( O'odham [Pima]: Keli Akimel or simply Akimel, Quechan: Haa Siʼil) is a 649-mile (1,044 km)-long tributary of the Colorado River flowing through New Mexico and Arizona in the United States. The river drains an arid watershed of nearly 60,000 square miles (160,000 km2) that lies mainly within the U.S., but also extends into northern Sonora, Mexico. Indigenous peoples have lived along the river for at least 2,000 years, establishing complex agricultural societies before European exploration of the region began in the 16th century. However, European Americans did not permanently settle the Gila River watershed until the mid-19th century.

During the 20th century, human development of the Gila River watershed necessitated the construction of large diversion and flood control structures on the river and its tributaries, and consequently the Gila now contributes only a small fraction of its historic flow to the Colorado. The historic natural discharge of the river is around 1,900 cubic feet per second (54 m3/s), and is now only 247 cubic feet per second (7.0 m3/s). These engineering projects have transformed much of the river valley and its surrounds from arid desert to irrigated land, and supply water to the more than five million people, mainly in the Phoenix and Tucson metropolitan areas, who live in the watershed.

The Gila River has its source in western New Mexico, in Sierra County on the western slopes of Continental Divide in the Black Range. It flows southwest through the Gila National Forest and the Gila Cliff Dwellings National Monument, then westward into Arizona, past the town of Safford. After flowing along the southern slope of the Gila Mountains in Graham County through a series of canyons, the Gila is impounded by Coolidge Dam in San Carlos Lake south of Peridot.

It emerges from the mountains into the valley southeast of Phoenix, Arizona, where it crosses the Gila River Indian Reservation as an intermittent stream due to large irrigation diversions. Well west of Phoenix, the river bends sharply southward along the Gila Bend Mountains, then it swings westward again near the town of Gila Bend. It flows southwestward between the Gila Mountains to the south and the Languna and Muggins ranges to the north in Yuma County, and finally it empties into the Colorado at Yuma, Arizona.

The Gila is joined by many tributaries, beginning with the East and West Forks of the river, which combine to form the main stem near Gila Hot Springs in New Mexico. Above Safford, it is joined by the San Francisco River and the intermittent San Simon River. Further downstream, it is joined by the San Carlos River from the north in San Carlos Lake. At Winkelman, Arizona, it picks up the San Pedro River and then is joined by the Santa Cruz River south of Casa Grande. The Salt River, its main tributary, joins in the Phoenix metropolitan area, and further west the Gila receives its last two major tributaries, the Agua Fria and Hassayampa Rivers, from the north. 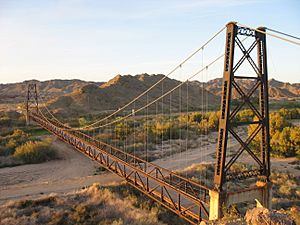 The McPhaul Suspension Bridge on a former section of US Route 95 spans the Gila between the Gila and Laguna ranges in Yuma County. The bridge is listed on the National Register of Historic Places.

A band of Pima (autonym "Akimel O'odham", river people), the Keli Akimel O'odham (Gila River People), have lived on the banks of the Gila River since before the arrival of Spanish explorers. Popular theory says that the word "Gila" was derived from a Spanish contraction of Hah-quah-sa-eel, a Yuma word meaning "running water which is salty". Their traditional way of life (himdagĭ, sometimes rendered in English as Him-dak) was and is centered at the river, which is considered holy. Traditionally, sand from the banks of the river is used as an exfoliant when bathing (often in rainstorms, especially during the monsoon). Indigenous peoples such as the Hohokam were responsible for creating large, complex civilizations along the Middle Gila River and Salt River between 600 and 1450 AD. These native civilizations depended largely on irrigated agriculture, for which they constructed over 200 miles (320 km) of canals. The upper Gila was inhabited by the Mogollon culture over most of the same time period, in settlements like those at Gila Cliff Dwellings National Monument in the later period.

The first European to see the Gila River was possibly Spanish explorer and missionary Juan de la Asunción. Asunción reached the Gila in 1538 after traveling northwards along one of its tributaries, either the San Pedro or Santa Cruz. In 1540, Hernando de Alarcón sailed up the Colorado and Gila Rivers; maps drawn by his expedition show the river as the Miraflores or Brazos de la Miraflores. 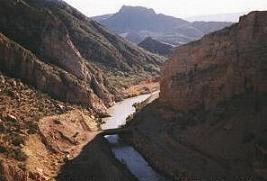 The Gila River near Coolidge Dam in Arizona 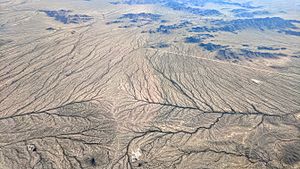 This patch of desert south of Buckeye, Arizona, drains east and west from a minor drainage divide. When they flow, both sides flow to the Gila River.

During the Mexican–American War, General Stephen Watts Kearny marched 100 cavalrymen from the 1st U.S. Dragoons along the Gila River in November 1846. This detachment was guided by Kit Carson. The Mormon Battalion followed Kearny's troops, building a wagon trail roughly following the river from December 1846 to January 1847.

After the Treaty of Guadalupe-Hidalgo in 1848, the Gila River served as a part of the border between the United States and Mexico until the 1853 Gadsden Purchase soon extended American territory well south of the Gila. The confluence of the Gila with the Colorado River was also used as a reference point for the southern border of California. Beginning in 1871, mainly Mormon settlers populated the Gila River valley around present-day Phoenix, using the Gila, Salt, and San Pedro Rivers for irrigation and establishing at least six major settlements.

In 1944, 25 German prisoners of war pulled off the largest and most spectacular escape from an American compound during the war, digging a 178-foot (54 m) tunnel out of the Navy’s Papago Park Prisoner of War Camp in Arizona. All of the men were eventually captured, though some remained at large for more than a month. Among the last to be captured were three German soldiers who had based their audacious but ill-fated escape plans on a stolen highway map of Arizona, which showed the Gila River leading to the Colorado River, which in turn led to Mexico. Devising a scheme to flee by water, the Germans constructed a collapsible kayak under the noses of their American captors, tested it in a makeshift pool within the prison compound, then sneaked it out through the tunnel. Their plan was perfect – except for the map. The Gila, shown as a healthy blue waterway, turned out to be little more than a dry rut. 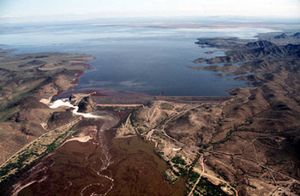 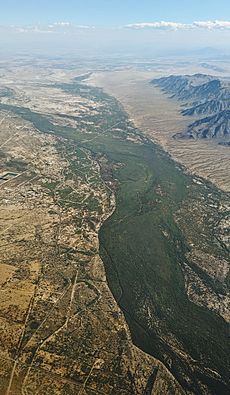 The only major dam on the Gila River is Coolidge Dam, 31 miles (50 km) southeast of Globe, Arizona, which forms San Carlos Lake. The Painted Rock Dam crosses the Gila near Gila Bend, although the river is a transient one at that point. A number of minor diversion dams have been built on the river between the Painted Rock Dam and the Coolidge Dam, including the Gillespie Dam, which was breached during a flood in 1993. Many dams have also been built on tributaries, including Theodore Roosevelt Dam on the Salt River, New Waddell Dam on the Agua Fria River, and Bartlett Dam on the Verde River. Many major dams in the Gila River system were built and operated by the U.S. Bureau of Reclamation, which also constructed most of the large dams throughout the Colorado River basin. Others, such as Coolidge Dam, are owned by local water supply agencies, irrigation districts, or Native American tribes.

The Gila River and its main tributary, the Salt River, would both be perennial streams carrying large volumes of water, but irrigation and municipal water diversions turn both into usually dry rivers. Below Phoenix to the Colorado River, the Gila is usually either a trickle or completely dry, as is also the lower Salt from Granite Reef Diversion Dam downstream to the Gila, but both rivers can carry large volumes of water following rainfall. A long time ago, the Gila River was navigable by large riverboats from its mouth to near Phoenix, and by smaller craft from Phoenix nearly to the Arizona – New Mexico border. The width varied from 150 to 1,200 feet (46 to 366 m) with a depth of 2 to 40 feet (0.61 to 12.19 m). The natural discharge of the river was roughly 1,300,000 acre feet (1.6 km3) per year, with a mean flow of about 1,800 cubic feet per second (51 m3/s) at the mouth. The river's present discharge near the mouth is less than 180,000 acre feet (0.22 km3) per year, with an average flow of just 247 cubic feet per second (7.0 m3/s). Overdraft from the Gila River system has prompted the construction of the Central Arizona Project, which delivers some 1,500,000 acre feet (1.9 km3) annually from the Colorado River to supplement water supplies in the basin.

The upper Gila River, including its entire length within New Mexico, is a free-flowing one. Recent efforts to allow for damming or otherwise diverting this stretch have met with stiff political resistance, having been named as one of the nation's most endangered rivers due to proposed dam projects such as Hooker Dam. During his time in office, former New Mexico Governor Bill Richardson had promised to block any such attempt during his term, and he had even considered pushing for a statutory prohibition against any such projects on the state's portion of the river. 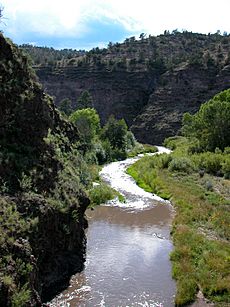 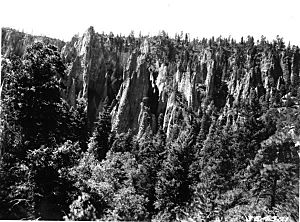 Rock spires above the East Fork of the Gila River, Gila Wilderness

The Gila River between Virden, New Mexico, and Solomon, Arizona, is navigable during spring snowmelt and after summer and autumn storms. The river passes through many scenic canyons and stretches of Class I to III whitewater. Due to its desert surroundings, the river is characterized by erratic flows and flash floods that reach high peaks and drop off just as quickly. The Gila's Salt River tributary has even more difficult whitewater, ranging up to Class IV in places, and often has higher and more dependable flows than the Gila.

The Gila River has also been known as:

All content from Kiddle encyclopedia articles (including the article images and facts) can be freely used under Attribution-ShareAlike license, unless stated otherwise. Cite this article:
Gila River Facts for Kids. Kiddle Encyclopedia.