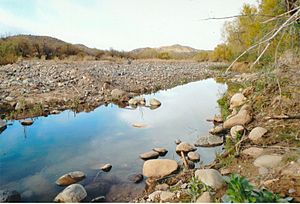 The Agua Fria River on the border edge of Gillett, Arizona. 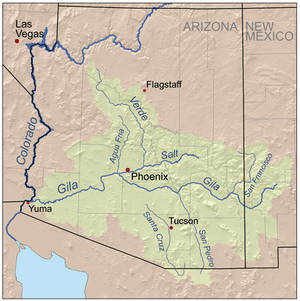 Map of the Gila River watershed including the Agua Fria River

The Agua Fria River (Spanish for "cold water") is a 120-mile (190 km) long intermittent stream which flows generally south from 20 miles (32 km) east-northeast of Prescott in the U.S. state of Arizona. Prescott draws much of its municipal water supply from the upper Agua Fria watershed. The Agua Fria runs through the Agua Fria National Monument. The river then flows through a small canyon called "Black Canyon" into Lake Pleasant, a popular recreation area near Peoria, Arizona. (There is a large "Black Canyon" on the Colorado River along the Arizona–Nevada border.) 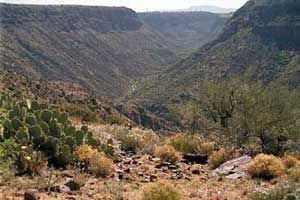 During rainy weather and at times when water is flowing in the intermittent Agua Fria River, it discharges into the Gila River, which also only flows during wet periods of the year.

The Central Arizona Water Conservation District of the Central Arizona Project operates the Agua Fria Recharge Project, which is about 4 miles (6.4 km) south of the New Waddell Dam. It serves to recharge underground aquifers in this area, and ends at Lake Pleasant, Phoenix. 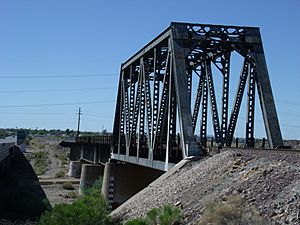 The historic Agua Fria River Bridge was built by the Santa Fe Railroad over the Agua Fria River in 1895. It is located on the right side of Grand Avenue if traveled from Phoenix to Wickenburg, close to 111 Ave. in El Mirage.

All content from Kiddle encyclopedia articles (including the article images and facts) can be freely used under Attribution-ShareAlike license, unless stated otherwise. Cite this article:
Agua Fria River Facts for Kids. Kiddle Encyclopedia.