Peoria is a city in Maricopa and Yavapai counties in the state of Arizona. Most of the city is located in Maricopa County while a tiny portion in the north is in Yavapai County. It is a major suburb of Phoenix. According to 2019 Census Bureau estimates, the population of the city is 175,961. Peoria is currently the sixth-largest city in Arizona in land area and the ninth-largest in population. It was named after Peoria, Illinois. The word peoria is a corruption of the Miami-Illinois word for 'prairie fire'. It is the spring training home of the San Diego Padres and Seattle Mariners, who share the Peoria Sports Complex.

Peoria sits in the Salt River Valley, and extends into the foothills of the mountains to the north. William John Murphy, who had worked on the Arizona Canal, recruited settlers to begin a community in Arizona, many of them from Peoria, Illinois. Four farming families left Illinois that fall to relocate to what is now Peoria, Arizona. An old desert road connecting Phoenix to the Hassayampa River near present-day Wickenburg was the only major transportation route in the area until 1887, when a new road was laid out. Named Grand Avenue, this road angled through the newly designed town sites of Alhambra, Glendale, and Peoria and became the main route from Phoenix to Vulture Mine. The settlers filed Peoria's plot map with the Maricopa County recorder on May 24, 1897, naming the settlement after their hometown.

Early growth of the town 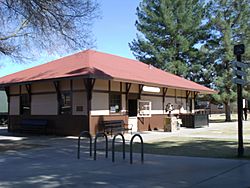 Between 1891 and 1895 a spur line of the Santa, Prescott and Phoenix Railroad was placed in Peoria along with Phoenix, Glendale, Alhambra, Hesperla, and Marinette. A small depot on 83rd Avenue just off Grand Avenue. The depot was sold to the city of Scottsdale in 1972 where it now resides at McCormick Stillman Railroad Park.

About 1919 the Peoria Chamber of Commerce formed. It operated as the informal government body until Peoria was incorporated in 1954. The Peoria volunteer fire district formed in 1920 and remained all volunteer until the mid-1950s. The three-story Edwards Hotel was built in 1918, followed by the Mabel Hood building in May 1920 at the southwest corner of Washington Street and 83rd Avenue. The John L. Meyer or "flatiron" building was completed in June 1920 and the O.O. Fuel's Paramount Theatre in July 1920 (It served as Fire Station 1 from 1950 until 2004). The town's first newspaper, The Peoria Enterprise, was printed weekly from November 14, 1917, to April 1921.

Peoria's first library was held at the women's club in 1920 until it moved to the old Peoria City Hall in 1975 (where the Peoria Center for the Performing Arts was constructed and currently sits). The library eventually moved to the Peoria Municipal Complex. In May 1959 the Women's Club gave the clubhouse to the City of Peoria.

Central School was built in 1906. By 1910, three additional classroom buildings were built next to the central school, and in 1918 another school building, containing an auditorium and four classrooms, was opened. In 1918 the attendance for Peoria schools was 190. School District Number Eleven was originally an elementary school district. Children going on to high school had to travel to Glendale High School. In 1919 the school board approved construction of Peoria High School.

Increased economic activity, combined with the presence of Luke Air Force Base and tremendous growth throughout the entire Valley—coinciding with the mass-production of air conditioning in the early 1950s—led to an increase in residential housing in Peoria. A postwar construction boom set the stage for Peoria to become a suburb of Phoenix, providing housing for the capital city as growth moved west.

Spring training has a long history in Peoria. From the late 1970s to 1990, Peoria's Greenway Sports Complex served as a minor-league training facility for the Milwaukee Brewers baseball team. This small facility was located at 83rd Avenue and the Greenway Road alignment, the location of the future Peoria Sports Complex. Construction of the new complex was approved in 1990. It was completed in 1994 and was the first Major League Baseball spring training facility in the county shared by two teams. The San Diego Padres and Seattle Mariners utilize the complex year round for spring training and player development. 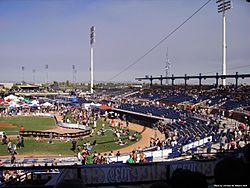 "In January, 2010, four months after breaking ground, Stirling Energy partner company Tessara Solar completed the 1.5 MW Maricopa Solar power plant in Peoria, Arizona, just outside Phoenix. The power plant is comprised of 60 SES SunCatchers." The SunCatcher is described as "a large, tracking, concentrating solar power (CSP) dish collector that generates 25 kilowatts (kW) of electricity in full sun. Each of the 38-foot-diameter collectors contains over 300 curved mirrors (heliostats) that focus sunlight onto a power conversion unit, which contains the Stirling engine. The dish uses dual-axis tracking to follow the sun precisely as it moves across the sky."

Peoria's identity is more related to resort and leisure living than the past, as that type of lifestyle migrates from the northeast Valley to Peoria. Peoria's economic plan focuses on establishing the new Loop 303 freeway corridor as an industrial, commercial, mixed development use and less on traditional residential development. In July 2008 Money Magazine listed Peoria in the Top 100 Places to Live.

Peoria has now annexed over 170 square miles (440 km2) and is in two counties Maricopa County and Yavapai County. It is technically the largest incorporated city in Yavapai County even though almost all of Peoria's current population resides on the Maricopa side.

The Agua Fria River and New River are the only rivers that flow through Peoria. The Agua Fria River is usually dry due to the New Waddell Dam that holds back Lake Pleasant in the northern end of the city. The New River is usually dry due to flood control measures and New River Dam. There are multiple washes and creeks that flow through the city as well, one of the most significant is the Skunk Creek due to its trails and connectivity with nearby Glendale.

The street system of Peoria is based on the city of Phoenix traditional grid system, with most roads oriented either north-south or east-west. The zero point is in downtown Phoenix at Central Avenue and Washington Street. Since Peoria is always west of zero, its north-south numbered Streets are Avenues. Major arterial streets are spaced one mile (1.6 km) apart (until you are north of roughly Pinnacle Peak Road). The one-mile (1.6 km) blocks are divided into approximately 800 house numbers although this varies. 83rd Avenue, being 8300 West. The numbers in Phoenix start at Central Avenue at a half-mile increment, going west to 7th Avenue ½ mile from Central but considered the arterial. Then the numbers go to 19th (1 mile from 7th), 27th, 35th, 43rd, 51st, 59th, 67th (in many places Peoria's eastern border), 75th, 83rd, 91st, 99th, and so on. In northern Peoria streets are more curvilinear and begin to not follow the north-south route due to rivers, mountains, and terrain challenges. The northern end of the city does still follow the alignment theory and still has blocking according to Phoenix. 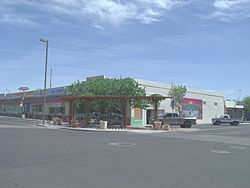 Old Town Peoria as seen from an intersection between Washington St. and 83rd. Ave.

Cross of Glory Lutheran School is a Christian Pre-K-8 grade school of the Wisconsin Evangelical Lutheran Synod (WELS) in Peoria.

Trine University opened a branch campus in Peoria in 2013. The Trine campus later closed in 2017.

All content from Kiddle encyclopedia articles (including the article images and facts) can be freely used under Attribution-ShareAlike license, unless stated otherwise. Cite this article:
Peoria, Arizona Facts for Kids. Kiddle Encyclopedia.