Kids Encyclopedia Facts
Not to be confused with Maricopa, Arizona.

According to the U.S. Census Bureau, the county has a total area of 9,224 square miles (23,890 km2), of which 9,200 square miles (24,000 km2) is land and 24 square miles (62 km2) (0.3%) is water. Maricopa County is also one of the largest counties in the United States by area having a land area greater than that of seven states. It is by far Arizona's most populous county, encompassing well over half of the state's residents. It is also the largest county in the United States to contain a capital city. 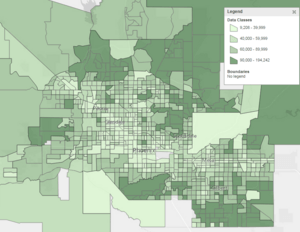 Median Household Income in 2015 across metro Phoenix; the darker the green, the higher the income 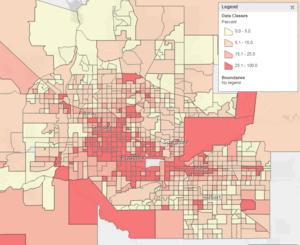 Percent of people living in poverty across metro Phoenix in 2016; the darker the red, the higher the concentration of poverty

Racial and ethnic composition since 1960

In the area of rail transport, the region is also served by Phoenix's light rail system. The county has no other passenger rail transport as Amtrak's Sunset Limited, which once served Phoenix, has its closest stop in Maricopa, Arizona in neighboring Pinal County. The train connects Maricopa to Tucson, Los Angeles, and New Orleans three times a week. However it does not stop in Phoenix itself.

The population ranking of the following table is based on the 2010 census of Maricopa County.

In 2019, the largest employers in Maricopa County were:

According to the Bureau of Economic Analysis, in 2019 the employment of Maricopa County in the following sectors was:

All content from Kiddle encyclopedia articles (including the article images and facts) can be freely used under Attribution-ShareAlike license, unless stated otherwise. Cite this article:
Maricopa County, Arizona Facts for Kids. Kiddle Encyclopedia.