The kumquats or cumquats are a group of small fruit-bearing trees. The edible fruit closely resembles the orange in color and shape but is much smaller, being approximately the size of a large olive. They are more capable of enduring difficult conditions than citrus plants such as oranges.

The kumquat plant is native to south Asia and the Asia-Pacific region. The earliest historical reference to kumquats appears in literature of China from the 12th century. They have long been cultivated in India, Japan, Taiwan, the Philippines, and southeast Asia. They were introduced to Europe in 1846 by Robert Fortune, collector for the London Horticultural Society, and shortly thereafter were brought to North America. 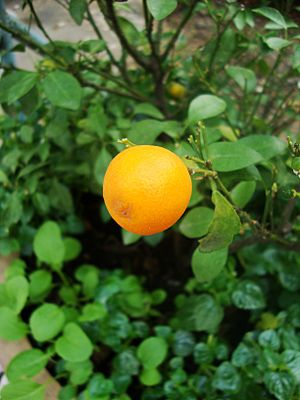 Kumquats are slow-growing, evergreen shrubs or small trees, from 2.5–4.5 m tall, with dense branches. Sometimes they have small thorns. The leaves are dark glossy green, and the flowers pure white, similar to citrus flowers.

Kumquats do not grow well from seeds and so are vegetatively propagated by using rootstock of another citrus fruit, air layering, or cuttings (using a rooting gel/powder). Like most citrus, they are self-pollinating.

All content from Kiddle encyclopedia articles (including the article images and facts) can be freely used under Attribution-ShareAlike license, unless stated otherwise. Cite this article:
Kumquat Facts for Kids. Kiddle Encyclopedia.