The most recent research indicates an origin in Australia, New Caledonia and New Guinea. Some researchers believe that the origin is in part of Southeast Asia, and it is in this region that some commercial species such as oranges, mandarins, and lemons originated. Citrus fruit has been cultivated in an ever-widening area since ancient times.

At various times, citrus plants were thought to be native to Asia (where they were first domesticated), Europe, and Florida. But the European oranges (such as the bitter orange) were originally brought from India at around the time of Alexander the Great, and the "native" oranges of Florida actually originated with the Spanish Conquistadors. The lemon reached Europe during the time of classical Rome.

The large citrus fruit of today evolved originally from small, edible berries over millions of years. Citrus plants diverged from a common ancestor about 15 million years ago. Within the last few thousand years, all common citrus fruits (sweet oranges, lemons, grapefruit, limes, and so on) were created by crossing the original species.

Citrus fruits are notable for their fragrance, partly due to flavonoids and limonoids (which in turn are terpenes) contained in the rind, and most are juice-laden. The juice contains a high quantity of citric acid giving them their characteristic sharp flavour. The genus is commercially important as many species are cultivated for their fruit, which is eaten fresh, pressed for juice, or preserved in marmalades and pickles. 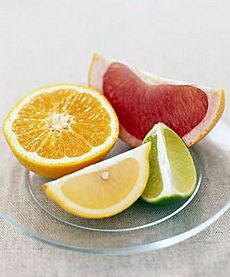 Wedges of pink grapefruit, lime, and lemon, and a half orange (clockwise from top)

Many citrus fruits, such as oranges, tangerines, grapefruits, and clementines, are generally eaten fresh. They are typically peeled and can be easily split into segments. Grapefruit is more commonly halved and eaten out of the skin with a spoon. Orange and grapefruit juices are also very popular breakfast beverages.

More acidic citrus, such as lemons and limes, are generally not eaten on their own. Meyer lemons can be eaten, they are both sweet and sour. Lemonade or limeade are popular beverages prepared by diluting the juices of these fruits and adding sugar. Lemons and limes are also used as garnishes or in cooked dishes. Their juice is used as an ingredient in a variety of dishes; it can commonly be found in salad dressings and squeezed over cooked meat or vegetables.

The rind and oil of the fruit is generally very bitter, especially when cooked, and so is often combined with sugar. The fruit pulp can vary from sweet and tart to extremely sour. Marmalade, a condiment derived from cooked orange and lemon, can be especially bitter, but is usually sweetened to cut the bitterness and produce a jam-like result. Lemon or lime is commonly used as a garnish for water, soft drinks, or cocktails. Citrus juices, rinds, or slices are used in a variety of mixed drinks. The colorful outer skin of some citrus fruits, known as zest, is used as a flavoring in cooking; the white inner portion of the peel, the pith, is usually avoided due to its bitterness.

Oranges were historically used for their high content of vitamin C, which prevents scurvy. Scurvy is caused by vitamin C deficiency, and can be prevented by having 10 milligrams of vitamin C a day. An early sign of scurvy is fatigue. If ignored, later symptoms are bleeding and bruising easily. British sailors were given a ration of citrus fruits on long voyages to prevent the onset of scurvy, hence the British nickname of Limey.

Pectin is a structural heteropolysaccharide contained in the primary cell walls of plants. Limes and lemons as well as oranges and grapefruits are among the highest in this level. Lemons have the highest concentration of citrate of any citrus fruit. 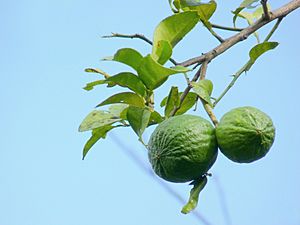 All content from Kiddle encyclopedia articles (including the article images and facts) can be freely used under Attribution-ShareAlike license, unless stated otherwise. Cite this article:
Citrus Facts for Kids. Kiddle Encyclopedia.