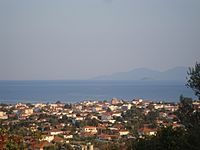 Asprovalta (Greek: Ασπροβάλτα) is a town near Thessaloniki in northern Greece. It was the seat of the Agios Georgios municipality. Since January 2011, Asprovalta belongs to the Municipality of Volvi. The population is around 3,039 people.

According to a book about Simonopetra, Asprovalta was built in the 16th century. Its first name was Aspra Valta. After the Greco-Turkish War, 54 families from western Turkey moved to Asprovalta.

All content from Kiddle encyclopedia articles (including the article images and facts) can be freely used under Attribution-ShareAlike license, unless stated otherwise. Cite this article:
Asprovalta Facts for Kids. Kiddle Encyclopedia.