Piraeus is a port city in the region of Attica, Greece. Piraeus is located within the Athens urban area, 12 kilometres (7 miles) southwest from its city centre (municipality of Athens), and lies along the east coast of the Saronic Gulf.

Piraeus has a long recorded history, dating to ancient Greece. The city was founded in the early 5th century BC, when this area was selected to become the new port of classical Athens and was built as a prototype harbour, concentrating all the import and transit trade of Athens. During the Golden Age of Athens the Long Walls were constructed to fortify Athens and its port (Piraeus). Consequently, it became the chief harbour of ancient Greece, but declined gradually after the 3rd century B.C., growing once more in the 19th century, after Athens' declaration as the capital of Greece. In the modern era, Piraeus is a large city, bustling with activity and an integral part of Athens, acting as home to the country's biggest harbour and bearing all the characteristics of a huge marine and commercial-industrial center.

The port of Piraeus is the chief port in Greece, the largest passenger port in Europe and the second largest in the world, servicing about 20 million passengers annually. With a throughput of 1.4 million TEUs, Piraeus is placed among the top ten ports in container traffic in Europe and the top container port in the Eastern Mediterranean. The city hosted events in both the 1896 and 2004 Summer Olympics held in Athens. The University of Piraeus is one of the largest universities in Greece. 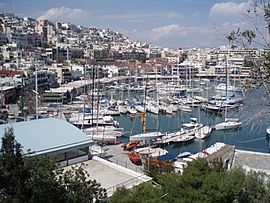 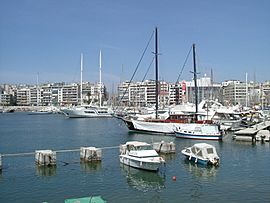 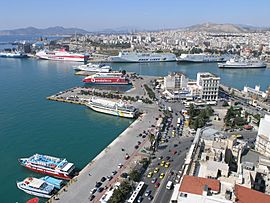 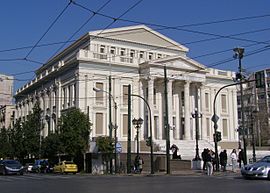 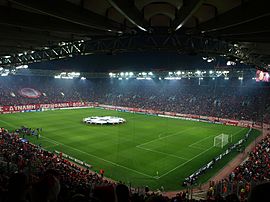 All content from Kiddle encyclopedia articles (including the article images and facts) can be freely used under Attribution-ShareAlike license, unless stated otherwise. Cite this article:
Piraeus Facts for Kids. Kiddle Encyclopedia.