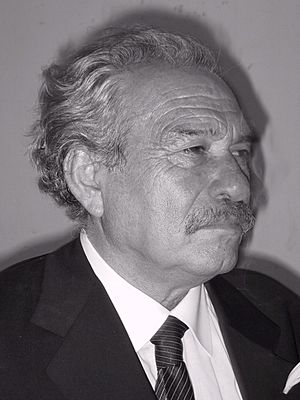 Jannis Kounellis (Greek: Γιάννης Κουνέλλης; 24 March 1937 – 16 February 2017) was a Greek-Italian contemporary artist. He was a painter and sculptor. He moved to Rome in 1956. He was best known for his work during the Arte Povera movement in the 1960s. He had art exhibitions in cities including Rome, London, New York City, Athens, Herning and Berlin. He was born in Piraeus.

All content from Kiddle encyclopedia articles (including the article images and facts) can be freely used under Attribution-ShareAlike license, unless stated otherwise. Cite this article:
Jannis Kounellis Facts for Kids. Kiddle Encyclopedia.