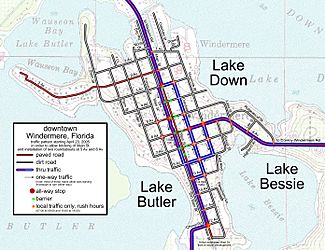 the grid plan of Windermere, Florida

A grid plan is the first basic plan in urban planning. It was developed in ancient Greece.It is a type of city plan in which streets run at right angles to each other, forming a grid. In ancient Rome a grid plan method of land measurement was called a centuriation.

All content from Kiddle encyclopedia articles (including the article images and facts) can be freely used under Attribution-ShareAlike license, unless stated otherwise. Cite this article:
Grid plan Facts for Kids. Kiddle Encyclopedia.