Windermere is a town in Orange County, Florida, United States. As of the 2010 census, the town population was 2,462. It is part of the Orlando–Kissimmee Metropolitan Statistical Area.

Windermere was established as a residential development in 1889 and chartered in 1925.

During late 2007, the Town of Windermere filed a proposal to annex Isleworth and Butler Bay, both wealthy subdivisions. This was met with extensive debate from town residents and an objection from Orange County, which stood to lose millions of dollars of property tax revenue. After lengthy discussions, and battles with the county, Isleworth remained in the county, but Butler Bay was annexed into Windermere, with over 90% of its residents approving annexation via a mail-in ballot.

There were 704 households out of which 36.9% had children under the age of 18 living with them, 70.3% were married couples living together, 6.5% had a female householder with no husband present, and 20.2% were non-families. 17.3% of all households were made up of individuals and 6.7% had someone living alone who was 65 years of age or older. The average household size was 2.69 and the average family size was 3.05. 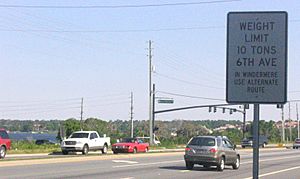 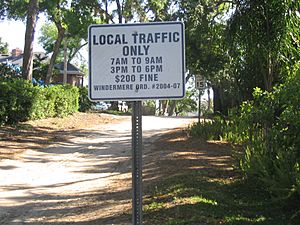 Through traffic is banned from using this street to bypass congestion during rush hours.

Windermere is located on an isthmus between several lakes in the Lake Butler chain. As such, it is on the shortest road route between the east and west sides of the chain. In fact, the next crossing to the south is 7.5 miles (12.1 km) distant at Lake Buena Vista, where County Road 535 (CR 535) and Apopka-Vineland Road meet. The next crossing to the north is at Gotha, the north end of the chain of lakes, 2.25 miles (3.62 km) away. 2003 Annual Average Daily Traffic (AADT), much of which is commuters passing through, is 17,197 vehicles per day for Sixth Avenue (the east entrance), 18,362 on Main Street north of Sixth Avenue, and 9,484 on Main Street south of Sixth Avenue.

Windermere regulates traffic and encourages traffic to use alternate routes. In 2004, two roundabouts were installed downtown with the largest public works project in the town's history. This has greatly improved traffic flow and relieved cut through traffic. A third roundabout was completed in August 2010 at the intersection of Park Avenue and Maguire Road. This is at the Windermere Elementary School intersection. All roads in the downtown area (laid out in a grid) are dirt roads except for a few through roads: 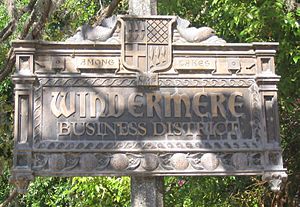 These signs appear on light poles at borders of the business district at the center of downtown.

Until the 1980s, Main Street north of Sixth Avenue and Sixth Avenue east of Main Street were maintained by the Florida Department of Transportation (FDOT) as part of State Road 439. This was given to Orange County as County Road 439 (CR 439), and Orange County eventually removed all signs and gave the part inside Windermere to the town. Signs put up by FDOT still mark the north end of CR 439 at SR 50, but no other signs exist, in part because Orange County has a general policy of not signing county roads.

All content from Kiddle encyclopedia articles (including the article images and facts) can be freely used under Attribution-ShareAlike license, unless stated otherwise. Cite this article:
Windermere, Florida Facts for Kids. Kiddle Encyclopedia.