Shaquille Rashaun "Shaq" O'Neal (born March 6, 1972 in Newark, New Jersey) is an American retired professional basketball player, actor and rapper. He had a 19 year career in the National Basketball Association (NBA) for the Orlando Magic, Los Angeles Lakers, Miami Heat, Phoenix Suns, Cleveland Cavaliers and Boston Celtics. He is often considered one of the most well-known players in the history of the NBA. He stands at 7 feet 1 inch and weighs 325 pounds, making him one of the heaviest players to ever play in the NBA. 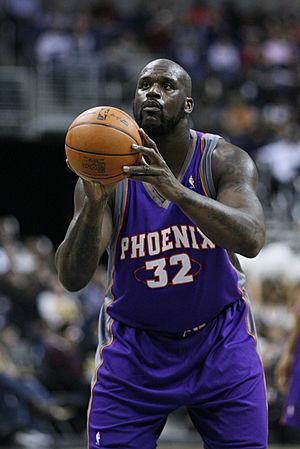 Shaquille O'Neal with the Phoenix Suns

Before playing in the NBA, O'Neal played college basketball at Louisiana State University. Throughout his 18 year career, O'Neal has used his size and strength to help him play well. O'Neal won a scoring title, an MVP and three championships with the Los Angeles Lakers; he later won a championship with the Miami Heat. He first played for the Orlando Magic and later for the Phoenix Suns. O'Neal won a gold medal with the 1996 Dream Team. O'Neal is currently the oldest player in the NBA and is the only one of the 50 Greatest NBA players, as chosen in 1996, to still be playing in the NBA. He has scored the most points of anyone still in the NBA, and the fifth-most of any NBA player ever. He also one of the best shooters in the history of the NBA, and has led the league in that category ten times. He has been named All-NBA and an All-Star quite a few times. He retired from the NBA on June 1, 2011 and held a press conference on June 3, 2011 to officially announce his retirement. After Shaq's college career he had 1 child.

O'Neal has appeared in several films and music videos, often as himself. He rapped on the song "2 Bad" on Michael Jackson's album HIStory. He has hosted two TV shows, one where he helps kids lose weight and another where he competes against athletes from other sports. He made a fine career in Los Angeles teaming with Kobe Bryant.

All content from Kiddle encyclopedia articles (including the article images and facts) can be freely used under Attribution-ShareAlike license, unless stated otherwise. Cite this article:
Shaquille O'Neal Facts for Kids. Kiddle Encyclopedia.