Sonny with a Chance facts for kids

Sonny with a Chance isnroe, portrayed by Demi Lovato, who becomes the newest accepted cast member of her favorite sketch comedy television show, So Random!.

In June 2009, Sonny with a Chance was renewed for a second season, which premiered in March 2010 to 6.3 million viewers. Disney Channel had originally renewed the series for a third season in November 2010, but Lovato's role was an uncertainty at the time after she checked into treatment for personal struggles two weeks prior. Production of the third season commenced without Lovato in January 2011, focusing on the So Random! aspect rather than behind the scenes. In April 2011, Disney Channel confirmed that Lovato would not be returning to the series' lead role and Sonny with a Chance would not return, choosing instead to rebrand the already-renewed third season as a spin-off titled So Random!. The spin-off aired for a single season before being cancelled.

The show became available to stream on Disney+ on April 3, 2020 along with the first season of So Random!. Disney branded So Random! as a third season of Sonny with a Chance on Disney+ rather than a separate show. The original cast reunited for a 30-minute virtual reunion titled, "Sonny With a Chance: A So Random Reunion", which was released on April 25, 2020.

Main page: List of Sonny with a Chance characters 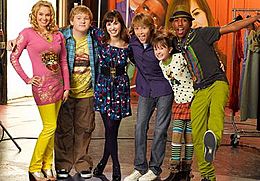 The original working title for the series was Sketchpad!, and the original name for the main character was Molly Munroe. The show's title was later changed to Welcome to Mollywood. After the first publicity materials about the show were released, the lead character's name was then changed to Holli and the title changed once again to Welcome to Holliwood. The main character's name was later changed to Sonny Munroe, and the show's title was changed for a final time to Sonny with a Chance. The name is a play on the words "Sunny with a chance of rain", as heard in weather forecasts, reflecting the many comical situations in which the cast find themselves in each episode. Bridgit Mendler was among many actresses whom auditioned for the title role, but Lovato was eventually cast.

Sonny with a Chance has a show-within-a-show, So Random!, complete with fully produced sketches. The show's executive producer Brian Robbins previously wrote for and served as an executive producer on the real-life kids sketch comedy series All That and The Amanda Show for Nickelodeon.

Gary Marsh, president of entertainment, Disney Channel Worldwide, stated "This series is rooted in one of the core thematic attributes that we stand for, which is following your dreams, there also was the opportunity to do a hybrid show." The show began production on September 15, 2008 and the first season was taped at Stage 11 at NBC Studios in Burbank, California; for the second season, the show's production moved to Hollywood Center Studios in Hollywood, California, where The Suite Life on Deck, Wizards of Waverly Place and Jonas were also filmed.

Main page: List of Sonny with a Chance episodes

Shows within the show

So Random! is a comedy sketch series that employs most of the main cast. It often causes the cast of Sonny with a Chance to dress in ridiculous costumes, and act out nonsensical situations. This was a spin-off to its own series after Lovato's departure.

The enemies of the So Random! group, Mackenzie Falls is a tween drama series featuring comedic overacting. The show is similar to Dawson's Creek and Gossip Girl, among others. The show's name, Mackenzie Falls, comes from Chad's character's name and the name of the town (which is located near a waterfall). In the season two episode "The Legend of Candy Face", the cast of So Random! made a parody of Mackenzie Falls titled Mackenzie Stalls, which was set in a bathroom. Minisodes and promos can be seen on the Sonny with a Chance website along with one minisode as a bonus feature on the DVD.

The show's theme song "So Far, So Great", was written and produced by Jeanne Lurie, Chen Neeman and Aristedis "Aris" Archontis, who have each written songs for several artists on Disney-owned Hollywood Records. It is performed by series actress Demi Lovato. The theme is of pop-rock style (the music cues composed by Chris Alan Lee and Scott Clausen, signaling scene changes and commercial breaks are styled similarly).

A full-length version of this theme was released via the Radio Disney network on March 31, 2009, less than two months after the show's U.S. premiere. The theme song is also featured as a track on the Disney compilation album, Disney Channel Playlist, released by Walt Disney Records on June 9, 2009. The song is also available as the bonus track on Lovato's second album Here We Go Again, released by Hollywood Records on July 21, 2009.

In the Russian version of the series ("Дайте Санни шанс" aka Give Sonny a Chance), the cast members' names are rendered in Cyrillic—and the intro is performed by a different Russian girl in Russian (not by Demi Lovato). Otherwise, in translation the intro music is not changed.

In the Brazilian Portuguese version ("Sunny Entre Estrelas"), the intro music is sung in translation.

Sonny with a Chance is a video game published by Disney Interactive Studios for the Nintendo DS. It was released on March 16, 2010 in America.

The soundtrack was released by Walt Disney Records on October 5, 2010. It was preceded by the single "Me, Myself and Time", was released on August 3, 2010.

Demi Lovato's departure and So Random!

It was announced on November 12, 2010 that the third season would begin production without Lovato, due to her recovering from health issues. Instead, the series focused on the sketch/comedy/music-variety show So Random!, centering on guest stars, sketches, digital shorts, and musical performances, a similar format to Saturday Night Live, but targeted at a much younger audience. Production of the third season began on January 30, 2011.

On April 19, 2011, People.com reported that Demi Lovato would not be returning for the third season. As a result, the show was renamed So Random! and focused on the sketches rather than the behind-the-scenes antics. As a result of Lovato's departure from Sonny with a Chance, the series became the second Disney Channel original series to have its lead actor/actress leave during the series' run (after So Weird), and the fourth Disney Channel series to have a main cast member leave the series during its run (with That's So Raven and Jonas also included).

The third season was then turned into its own new series based on the new format.

All content from Kiddle encyclopedia articles (including the article images and facts) can be freely used under Attribution-ShareAlike license, unless stated otherwise. Cite this article:
Sonny with a Chance Facts for Kids. Kiddle Encyclopedia.