The Chicago Bulls are an American professional basketball team based in Chicago. The Bulls compete in the National Basketball Association (NBA) as a member of the league's Eastern Conference Central Division. The team was founded on January 16, 1966 and played its first game during the 1966–67 NBA season. The Bulls play their home games at the United Center, an arena on Chicago's west side shared with the Chicago Blackhawks of the National Hockey League (NHL).

The Bulls saw their greatest success during the 1990s when they played a major part in popularizing the NBA worldwide. They are known for having one of the NBA's greatest dynasties, winning six NBA championships between 1991 and 1998 with two three-peats. All six of their championship teams were led by Hall of Famers Michael Jordan, Scottie Pippen and coach Phil Jackson. The Bulls are the only NBA franchise to win multiple championships while never losing an NBA Finals series in their history.

Michael Jordan and Derrick Rose have both won the NBA Most Valuable Player Award while playing for the Bulls, for a total of six MVP awards.

The Bulls share rivalries with the Cleveland Cavaliers, Detroit Pistons, Miami Heat and the New York Knicks. The Bulls' rivalry with the Pistons was highlighted heavily during the late 1980s and early 1990s.

The iconic Bulls' logo is a charging red bull's face. The logo was designed by noted American graphic designer Dean P. Wessel and was adopted in 1966. At one point, the Bulls also had an alternate logo during the early 1970s, featuring the same Bulls logo, but with a cloud that says "Windy City" below the bull's nose. 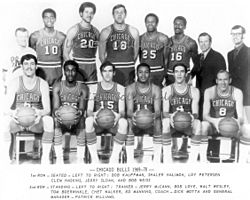 The Bulls have three different uniforms: a white home uniform, a red road uniform, and a black alternate road uniform. The design of the white and red sets are nearly identical, with the team name featured on the front over the number, and the player's last name over the number on the back and under the Bulls' logo. The shorts have the Bulls logo in a diamond shaped design on the sides of the legs. The red and white uniforms have remained mostly unchanged since 1966, with minor modifications from off-centered numbers, drop shadows and side stripes to white lettering and "Chicago" wordmark on the road uniforms. The present red/white uniform design was unveiled in the 1985–86 season, first using screen printing (with the player names in block lettering without the additional trim), before returning to the traditional sewing methods (player names are in serifed block lettering and with added trim). The Bulls logo was added atop the player's name in 2004. Since the 2014–15 season, a gold tab representing the Bulls' six championships was added on the back hemline, while the NBA logo replaced the Bulls logo atop the player's name. 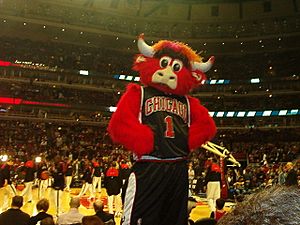 Benny the Bull at the United Center.

Benny the Bull is the main mascot of the Chicago Bulls. He was first introduced in 1969. Benny is a red bull who wears number 1. Benny is one of the oldest and best known mascots in all of professional sports. The Bulls also had another mascot named Da Bull. Introduced in 1995, he was described on the team website as being the high flying cousin of Benny, known for his dunking skills.

All content from Kiddle encyclopedia articles (including the article images and facts) can be freely used under Attribution-ShareAlike license, unless stated otherwise. Cite this article:
Chicago Bulls Facts for Kids. Kiddle Encyclopedia.