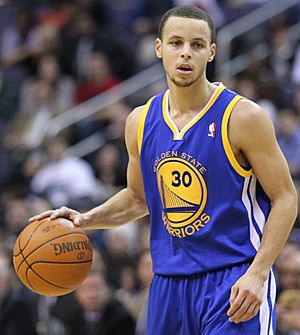 Stephen Curry is one of the best scoring point guards in the NBA.

Point guard is a position in basketball. It is one of the most important positions. A point guard should maintain his team's offense by controlling the ball safely and pass the ball to the right teammate at the right time. Because of his role in the play, a point guard is usually called a commander on the court. Steve Nash, Chris Paul, Stephen Curry and John Stockton are famous point guard in the NBA.

Required abilities to play as a point guard

First of all, right pass is the most important requirement to be a good point guard. A point guard's first thought should be being an excellent passer and getting the ball to his teammates for easy shots. Because the offense is usually started from a point guard who handles the ball, he should be able to find the open man, and when to pass and not pass to avoid costly turnovers and score easily.

Third, a point guard is a coach on the court. To command proper strategy to his teammates, a point guard should understand all strategies which are commanded by his coach. This ability may help a point guard to play the game well with the right strategy at right time.

Lastly, a point guard should be a good shooter. Sometimes the game can be unfavorable, even a point guard pass well and play the game with right strategy. At this time his accurate shooting can be an escapeway from this situation. By announcing his ability to shooting accurately, a point guard can plant an awareness to opponents that they should defense him well. And it cause the decreasing of pressure to other teammates to offense. Like this, a point guard's shooting ability can be the option to offense effectively.

All content from Kiddle encyclopedia articles (including the article images and facts) can be freely used under Attribution-ShareAlike license, unless stated otherwise. Cite this article:
Point guard Facts for Kids. Kiddle Encyclopedia.