Pau Gasol Sáez (born July 6, 1980) is a Spanish professional basketball player for the Milwaukee Bucks of the National Basketball Association (NBA). He is a six-time NBA All-Star and a four-time All-NBA selection, twice on the second team and twice on the third team. Gasol has won two NBA championships, both with the Los Angeles Lakers. He was the NBA Rookie of the Year in 2002 with the Memphis Grizzlies, and is one of only three non-American NBA players to have won that award. He is the older brother of fellow NBA player Marc Gasol.

Gasol was selected by the Atlanta Hawks with the third overall pick in the first round of the 2001 NBA draft, but his rights were traded to the Memphis Grizzlies. He currently holds the Grizzlies' franchise record for free throws made and attempted. Following more than six seasons with Memphis, Gasol played for the Los Angeles Lakers (from 2008 to 2014), the Chicago Bulls (from 2014 to 2016), and the San Antonio Spurs (from 2016 to 2019). 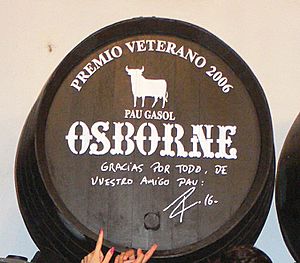 All content from Kiddle encyclopedia articles (including the article images and facts) can be freely used under Attribution-ShareAlike license, unless stated otherwise. Cite this article:
Pau Gasol Facts for Kids. Kiddle Encyclopedia.